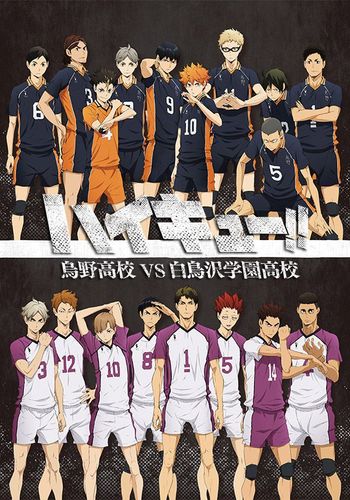 An absoloutely amazing anime for any beginner or even pro weeb. If you aren't a fan of intense fighting (Naruto, AOT, HxH, etc) you might come to love this anime as much as I do. The story and excitement is almost too hard to handle sometimes, and I LOVE IT so much.

Not to mention, Haikyuu! has some of the hottest anime characters ever to exist.

i usually wait till i have watched something whole but this time there is no need to.

episode 4 just came out and while the season so far has been perfect i just can`t believe how an anime about volley can be so damn good.the episode was crazy good ,it gave me goosebumps and it made cheer or frawn for every point won or lost.in the end one or two manly tears run down my cheek because of the intensity.

season 1 was almost 5/5 material, season 2 was of course 5/5 perfection manifested and season 3 is already 10/5.i really haven`t felt like that for an anime since....propably one piece(not even kidding).so yes that means watch it, do a favor to yourself and watch it.

I absolutely loved Haikyuu S3. It was everything I could’ve wished for. Haikyuu reminded me why I love sports so much. I got the same exact feeling when I watched my favorite football team win their first big final. It was phenomenal, and I’m extremely hyped for S4.

There are many reasons Haikyuu!! became a recent favorite of mine, and it's in this third season that all of those are fully realized. That they decided to devote ten full episodes to just one game shows the level of care and respect that went into the season's planning, and all this effort culminates into something memorable in the end. While the story still appears to be far from over, Haikyuu's third season is as satisfying a conclusion as you can get, since it was able to benefit from well-paced build-up in the first two seasons.

It's true there's nothing immediately unique about Haikyuu, since it still tells the standard sports story of an underdog clawing its way to the top. But it's got heart, and because of this, the show's able to develop a personality special enough to make it stand out. The game action is top-notch, but it's really the characters who make the show what it is. Indeed, it's proof of Haikyuu's high marks that not even the animation's the first thing that springs to mind when you think about it. This is a show that plays the long game with its characters, where personal quirks teased and hinted at in the earlier seasons are fully fleshed-out and properly maximized in this third outing. Because wasted characters and scenes are so few and far in between, the pay-off to dozens of episodes' worth of set-up is well and truly worth it.

If there's any real complaint I have about this, it's that Shiratorizawa, the final opponent, doesn't have much of a personality beyond its team ace. But with this season's moral focusing on the clash between the individual star player and a strong team, I guess this wasn't a decision that was made by accident. And on some level, it also helps build Shiratorizawa's reputation as gods of the court and seemingly impossible to beat. In the end, it's this strong emphasis on teamwork that makes Haikyuu!! a sports show worth following. Although Hinata and Kageyama are the obvious heads of Karasuno's offense, everyone else on the team contributes in ways only they can. So when they score a point, you can believe it was a win well-earned by everyone on the court.

The show borders on cheesy in some moments, but between game highlights you'll find yourself replaying, character interactions that feel completely natural, and a story deserving of the stakes, it's clear Haikyuu's a show good enough to remember and worthy of the hype. Let's just hope they don't make us wait too long before they finally air the fourth season.

I literally had so many semi-heart attacks watching this-