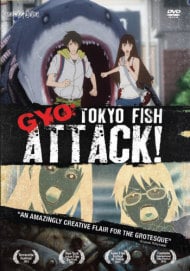 So um... wtf did I just watch? I spent ages trying to find a website to watch it on (ended up on putlocker) only to be traumatised, grossed out and confused.  **spoilers** First off, the bloated monsters they become once infected are disgusting and made me feel ill - especially with the poo shooting and farting. Second, the only reason this scared me in the slightest was because I was so grossed out and confused. It does give some explanation of the cause with the WW2 biological weapons and gas testing, but then they throw logic out the window and say the mechanical legs were beyond human construction. I wish there was more consistency and logic behind the explanation as you can't really throw walking fish in an anime without at least that. Even with the gross animation and lack of explanation, they should have at least allowed us to fall in love with the characters. All we received regarding them was a toxic friendship and a love for a fiance we never get to meet (properly). They could have at least had a bit more personality.  **end of spoilers** Overall, this anime was a waste of time trying to find and I'd only reccomend it to others as a joke to see if they throw up.

(I'm sorry to the people who like this anime.)Ok warning this was the grossest thing I ever watched in my life. I watched i yesterday and i threw up quite a few times while watching it. It was weird to boot and there was no real ending either it was just stupid.

Story: 3/10 What do you get when you combine sharks, the smell of decaying sea life, and machines that have no business existing?  You get Gyo, an anime that takes all three things and mashes them together in hopes of creating something scary.  In it, we follow the adventures of Kaori, a girl-next-door who rushes back to Tokyo to find her boyfriend, who's caught in the worst of a sudden and unexplained "fish-on-legs" epidemic.  To say much more would spoil what little plot there is in Gyo, but suffice to say there's not much of one anyways. However, let's get this out of the way, since it's very likely to be the first and last thing you notice about Gyo (and maybe this is a selling point for some people, I don't know): it's gross.  And I do mean that very, very literally.  We are talking about rotting fish, giant pustulent bodies, and, to keep it classy, shots of thong-clad buttocks farting.  I am not making this up.  You cannot make this up.Animation: 3/10Unfortunately, being a Junji Ito creation and a scent-based horror story, Gyo suffers from several unforgivable animation flaws.  Ito's work has been known for its use of body horror, with close-up shots of bodies twisted into improbable shapes and stark black and white images of characters' terrified expressions.  However, what works well as a still image doesn't necessarily translate well as an animated one, and that's where Gyo loses any real semblance of credibility or entertainment value; instead of being directly presented with the horrific images themselves, not only are they animated so that the gruesome detail that Ito favors end up looking childish and silly, but they go by so quickly that one can't fully absorb the horror of what they're seeing before Gyo rushes you off to the next scene so that it can fit the entire story into its 70-minute time limit.The animation of the various odors and gases emitted by Gyo's creatures and characters is simply a bunch of oily-looking overlays and watery effects colored in a multitude of unpleasant shades, such as 'my dog's barf after consuming a rotting squirrel,' 'that one time my roommate was so wasted he shit himself,' and other such visual delights.  Unfortunately, showing someone gross colors and then images of people covering their noses and making faces doesn't convey scents, it just looks silly.One of the most effective parts of TV and cinema horror comes from the unknown - not being able to see the entirety of what you're afraid of, the use of dark, muted tones, heavy shadows, and so on.  Gyo uses none of these.  Instead, the colors are vivid and clear, with shading and shadows being minimal and under-used, thus detracting from the very "Ito" qualities that made the original manga actually horrifying.  When the skies are a vibrant blue, the bushes are the same color as a granny smith apple, and everyone's outfits are so vivid that the only way you'd miss them is to be colorblind, it's hard to be very scared.Sound: 5/10Unremarkable.  The voice acting was passable, the sound effects worked for what they were, and, well, no one can say Gyo didn't put a decent amount of effort into the sounds a shark with mechanical legs might make if it were a real thing.  There were a few minutes when the music overpowered moments of exposition or dialogue, but you're not missing much anyways.Characters: 1/10Gyo has a handful of equally unlikeable and unmemorable characters, who are mostly an excuse to play a horror movie drinking game or take bets on who'll be the first to die.  There's Kaori, a fairly non-descript nice gal who's trying to reunite with her boyfriend in these fish-infested, incredibly dangerous times and Shirakawa, a reporter who makes it his objective to help Kaori get to her boyfriend.  We also meet Erika, the sexually promiscuous provider of panty shots, and Ari, a big eater with some misanthropic tendencies.  (If you're playing the Gyo drinking game, give yourself a pat on the back if you guessed Panty Shots will be the first one to have something unfortunate happen to her; you guessed well.)  Everyone else is cannon fodder and don't warrant names or identifying characteristics.Overall: 3/10There are too many plot inconsistencies, zero characters that one might care about, and such poor quality animation that nothing all that positive can really be said about Gyo.  Anyone looking for a faithful or interesting adaptation of Junji Ito's admittedly ridiculous (but still vastly superior) horror manga will be disappointed. Basically, this adaptation (I know, I know)...stinks. Ba-dum, tsh. 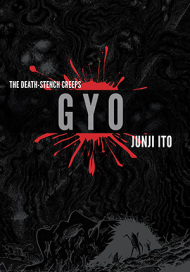