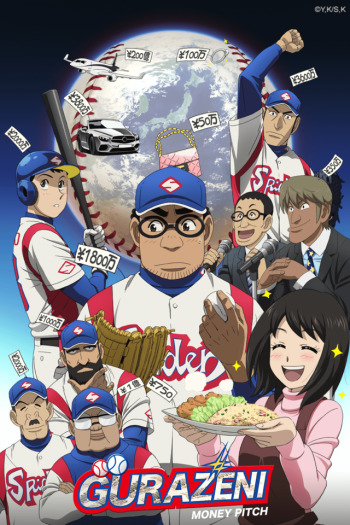 The problem with Gurazeni is that it’s a story you feel like you’ve already seen before, even if its subject matter – pro baseball, salary figures, fights for roster spots – should have been interesting enough for the average baseball fan. As a main character, relief pitcher Bonda Natsunosuke should have been a relatable guy you could have gotten behind. He’s 26 years old, a role player on the team, and gives just the right amount of effort to earn his next paycheck. He doesn’t have a lot of aspirations beyond maintaining his spot on the team’s line-up, and strikes the right balance of being both competent and unremarkable enough to keep his job. But he’s uncharismatic and flimsy even as a narrator; informative in some of the right places, but completely boring when it counts.

As a series released in the Year of Our Lord 2018, Gurazeni barely works, especially since it looks like it’s running on empty to meet industry standards that were set five or eight years ago. Like its main character, the show doesn’t strive to be anything beyond average. Unlike its main character, this one should have been dropped down to the minors a long time ago.

There was some real potential here to make it a good field guide for baseball fans interested in the world of pro ball, but Gurazeni manages to be mediocre enough to make each episode feel like a chore to get through. It's a show that strikes out in more innings than one, and its terrible, outdated animation is just half the story. You might be getting into this to take a break from the latest re-telling of a high school team's journey to Koshien, but don't be surprised if you find yourself wishing for a return to passion-filled storylines set in teenage ballparks. Even the funky opening and ending songs can't completely drown out Bonda’s droning calculations and repeated declarations of the series' title.