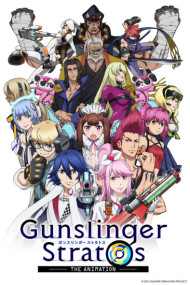 A.D. 2115 — the island nation once called Japan is now known as the “17th Far East Imperial City Management District.” The citizens were promised a life of peace in exchange for some of the comfort they were used to having. People believed their lives would never change and tomorrow will be the same as today. No one suspected the impending doom which their society was about to face…

Open Hostilities / My Other Self

Castaway / The Other World

Battlefield / The Price of Bloodshed

Counterattack / The Destination of Emotions

Showdown | At the End of Time

Tl;DR - Would you be surprised if a series whose source material is an arcade game is crap? Guess what! OK, so here we are talking about Gunslinger Stratos. As I alluded to, it's an anime that is based off of an arcade game, which is well known as a medium that is optimal for presenting rich and interesting storylines... ok you're already not taking this sentence seriously. Wasting time on a story is the opposite of what most arcade games want to do. If you waste time telling a story, then generally that's time spent where the player isn't playing, ergo the player isn't losing and thus isn't cramming more money into the machine. Instead, the magic sauce for most arcade games is to apply just barely enough story to set up the game mechanics and get the sweet, sweet cash out of the player's ham fists and into the machine. It's the same concept as how strippers work, only you don't get beaten by the bouncers when you mix up which slot the money goes in. Now, despite this obvious detail and for whatever reason (I'm guessing some sort of contractual obligation or boredom) we have been afflicted blessed with Gunslinger Stratos. Honestly I don't know a whole lot about the game (I've heard it's quite fun), but I know enough to know that there isn't much plot to speak of. For the anime, they took what little there was and streeeeeetched and squeeeeeeeeeezed it very painfully into a full show. And it's completely 'nanners. A plot synopsis is something like this: People (read: teenagers, it's anime so of course) must time travel to the past and fight their doppelgangers from other parallel dimensions to the death with [often ridiculous, e.g. one character uses a minigun with a giant bayonet] magical/sci-fi weapons. If they don't, some sort of nebulous villains called the Timekeepers (who are explained more towards the end, to my infinite amusement they turn out to be nanomachines, though there's no Metal Gear crossover) will turn people to sand at random, because they're assholes. To aid our heroes in their task of killing themselves they pick up the series resident deus ex machina Swiss Army Knife, called energy cubes, which basically do whatever happens to be necessary to advance the "plot" at various points in the story. Also, needless to say killing yourself and your friends from alternate universes is rather traumatic, so there's a heavy dose of broodiness and hormonal teenagers present that motivate different events. The overall plot of the show trends towards the characters fighting off the Timekeepers but... (spoiler alert) after they actually finally manage to defeat them, the parallel universe version of the main character decides the actual main character isn't hardcore enough and tries to kill him in order to achieve some vague and illogical end that doesn't make much sense. As always folks, let this remind you to immediately kill your doppelganger or else they will eventually try to murder you. Now, here's the thing: I like shows that are bad like this one. It's hilariously bad. It checks all the boxes, awkwardly inconsistent time travel, hilariously dumb dialog, spiky hair, perplexing characters... oh man there's just so much here to mock. I had a blast watching this show. I'm going to avoid commenting on the technical aspects of this show because there really isnt much to say. It has colors. It has spiky hair and gravity defying clothing. The creators can definitely draw better than I can, but that's not setting the standards very high and I'm not willing to give them much credit beyond that. The takeaway is that this show is a disaster. It's comically awkward, but I'd only recommend it if you enjoy laughing at other people's [terrible] work (like me!). Hopefully my scathing sarcasm properly communicates my dislike of the show. PS: I just realized that A-1 Pictures (the studio that made it) is responsible for making some of my favorite series in recent memory (A/0, Shigatsu wa, Silver Spoon, Space Brothers, Servant x Service and a few more). I guess nobody is perfect.

At first you don't understand what the hell is going on, but as the show gets into the second episode everything starts to become more clear. The entire show is based in the future, with one exception, they travel back through time with a small team of fighters to battle themselves from a different timeline. However, the large twist is the shows duality and take on society and people in general. There is quite a lot of talk about changing the future where humans end up destroying themselves through evolution/strength of weapons. Which in our present day holds a lot of weight a validity to the overall shows theme.    The basic metaphor of the entire show is this: Humanity and it's future is never written in stone, but the potential to destroy ourselves is still quite great. Their answer to this destruction is to create a world government so that we are not fighting each other and destroying the people and the world in which we live in.  As far as the animation, style, music, color, etc. it is what you would expect from any solid animation coming out in this era of amazing computer graphics. The characters are quite shallow in depth to their personalities and nothing really sets them apart from a fiary tail, one piece, or gundam character that isnt one of the main points in the stories. Overall an enjoyable watch, and worth the bing of 12 episodes! 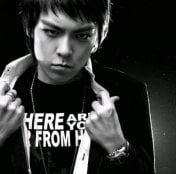 In my opinion this is one of the greatest animes I have seen in a long time. It reminded me of STEINS;GATE  a bit, which is another favorite of mine. The story may be a tad hard to follow, but it's super interesting! The whole concept and world this anime is set in is totally awesome! Beautiful, beatiful animation and the characters all have great personalitites. Some kind of pop up and you probably won't know who they are, but overall this is a very straight up badass anime with lots of action and twists and turns. I'm gonna recommend it to a lot of my friends for sure! 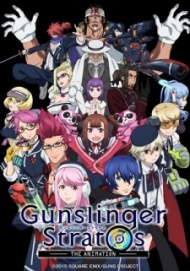