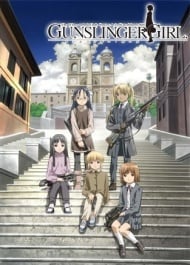 StoryThe basic premise: dehabilitated, parentless girls are healed, brainwashed and then forced to work as cyborg assassins for a government institution. In my mind, there would have been a far easier way to make this anime. With almost no mental effort whatsoever, one could very easily use its pretext as a jumping board for a lighthearted, mindless action anime. The plot could have been the kind of meaningless, unimaginative action fluff found in animes like Naruto, Noir or Scryed. If one made the girls older and the men younger, one could effortlessly throw in a few love triangles as well. All in all, the series would most likely be outrageously successful, and there would be sequels upon sequels to harvest money from. Or, even better, they could have transformed Gunslinger Girl into a manipulative, super-obvious morality fest. The message of the anime could oh-so-easily be the no-shit statement, "Its wrong to brainwash young girls!" After a few painfully preachy expository episodes, the anime could punctuate its "point" by finding an excuse to murder a million or so people, Saikano-style. This would ensure a hardcore following by anyone "with a heart," and would soon spawn hundreds of reviews on animenfo praising the animes "symbolism" and "realism" (have you ever noticed that people who say a work has symbolism without mentioning whats being symbolized are full of shit?). Lets thank God the creators didnt do either of these two options. Instead, the anime opts for a much more intelligent approach. Rather than dwelling in the blatantly obvious (what this organization is doing to these girls is obviously wrong), it asks a much harder question: "Are these girls still human?" The anime thinks hard on its seemingly unanswerable question, and carefully ponders the girls humanity. At the end, rather than have a traditionally violent climax, the anime answers its own conundrum. I wont reveal the direction the series goes in, but allow me to say that in the final episode it is very clear what the anime thinks these girls are. To accomplish its study, Gunslinger Girl is very heavy on character development and somewhat light on actual storyline. Furthermore, action scenes are well done when they appear, but far less frequent than fans of Noir will probably expect. Many people may be put off by this somewhat unconventional method of storytelling. I, however, enjoyed the approach immensely. Contemporary entertainment nowadays seems to be focusing far too much on the What, When, Where and How. In my opinion, the Who and Why are much more important. The creators of Gunslinger Girl clearly agree with me.AnimationAlthough not particularly necessary for this kind of character study, the animation is nonetheless surprisingly good. As mentioned before, when action scenes occur, they are nothing short of exceptional (unlike Noir and Witch Hunter Robin, they dont skimp out on blood either). The rest of the time, the animation is still pretty good. All of the girls character designs are deceptively pleasant to look at, with pretty, guileless faces that belie their true nature, while the "brothers" character designs realistically show the lines of guilt creasing their faces.SoundAs for sound, I enjoyed the OP immensely. The rest of the OST is very introspective and classical, and while it isnt very good to listen to by itself, it works very well when combined with the anime itself. Voice acting is done in a very low-key, charming sort of way.CharactersThere are few anime characters that are as simultaneously frightening and sympathetic as the ones in Gunslinger Girl. Put simply, the characters are what make the show as compelling and memorable as it is. Over the course of the series, the viewer is constantly thinking about these girls' humanity. Are they the monsters they were manufactured to be, or the innocent children they were born as? Over the course of the anime, the creators carefully weigh both sides. On one side, the girls at first glance certainly SEEM normal. In many ways, they ARE normal. They carry the same naivete characteristic of an adolescent girl and also share the overwhelming desire to please their (surrogate) fathers. The fact that their love has been artificially misplaced by the government doesnt make the love feel any less real. On the other hand, these girls have absolutely lost their morality. They no longer feel any guilt whatsoever for murdering hundreds of men, so long as they feel their "brother" (a euphemistic term the agency uses in place of "master") wishes them to. The total absense of hesitation with which these girls slaughter is remarkably chilling. One of the animes best and most moving moments is an almost throw-away scene that effectively combines both arguments. When one of the girls feels that she may be temporarily removed from her "work," she panics; to stop killing, even for a little bit, would prove that she was unsatisfactory to her master. In desperation, she pleads, "though Ive only killed four people this month, last month I killed ten!" Do we love her for her earnest desire to be loved, or do we hate her for her amorality?OverallAll in all, I really enjoyed this series. Gunslinger Girl could have easily devolved into one of the aforementioned anime archetypes, but instead it manages to maintain a good deal of its integrity and originality. Others may be put off by its generally philosophical nature, but those with an open mind will most likely be pleasantly surprised.

StoryWhile the idea of exploiting children or other human beings for murder might seem unoriginal, Gunslinger Girl still manages to bring a bit of uniqueness to the story, mostly through how the story is told, rather than the content. So as far as actual content, I enjoyed what it was about. Although murder and assassination is the job of these young girls, the focus of the series is more based on them as characters, and the morality of using them as tools to reach a means. Because the main topic seems to be character development and moral issues, you should be forewarned that the pacing is very slow, and the actual flow of the series is very lacking and uneven. Each episode tends to be related to one of the girls at first, her past, and how she fits in with her "brother"/partner. Near the end, the focus of morality is touched on more. However, there really isn't a central plot, and for that reason, there isn't really an ending, or one that is conclusive at all (or satisfying). AnimationI'm a big fan of the type of character designs that were prevalent in Gunslinger Girl. Soft tones were used for the color scheme, usually grays and dark blues. The scenery of the towns was impressive, as much of the series takes place in Italy. Definitely a refreshing step away from seeing same old Tokyo in every anime series. The actual "fights" (or assassinations, I should say) were done well, though seemed a bit generic. Girls with guns seems overdone, and the animation style used when they fought was no different. Then again, how many different things can you really do with a gun? One thing I think was done well was how much the expressions on the girl's face contributed to how disturbed you feel. I doubt many people will watch this series and not be at least a little disturbed about the notion of using extremely mentally scarred, brainwashed girls (this isn't a spoiler, it's revealed in episode 1) for killing tools... and you can see the girls' apathy in their completely neutral, mellow, and calm faces, even when they are being talked down upon. It is almost like they are a puppy dog vying for the attention of their master, and this makes it even more disturbing. SoundBeautiful orchestral tracks dominated this series. Many songs had an Italian flair to them, given where a lot of the series took place. Opera songs were present as well.CharactersWhile great care was taken to try to make you empathetic towards the plight of the girls, I felt no real attachment after seeing each of their pasts. Because of how distanced you are from them emotionally (due to their total lack of it, as well as not a clear picture of how happy/whatever they were prior to becoming the killer), you just can't feel too much towards them. I didn't feel like any of the characters were really developed over the course of the 13 episodes. The first half of the series introduced each character on a shallow level, and then ended with another 7 episodes of wishy washy "plot" and attempted character development which really didn't work for me. The "brothers" were introduced as well, but I also didn't feel like they evolved or changed over the course of the series. You had indications that a few of them were different as far as empathetic towards the girls in the very beginning, so it wasn't a surprise when they expressed it a little more by the end... but nothing huge. Voice actors did fine for all characters involved.OverallGunslinger Girl is a visual treat with beautiful music, interesting character designs, and an interesting idea at a plot. So where does it fail? First of all, the pacing is atrocious and the flow between episodes is almost non existant. I like slice of life shows, but this tries (and fails) at combining slice of life, with character development, with action/killing. at least half of the series is dedicated to shallowly introducing one character, who then isn't even a big part of the story. Had this been 26 episodes, perhaps all the introduction would have been prudent, but it just succeeds in making the "story" even less noticable and prominent. Secondly, as mentioned already, the series can't decide what to be. With only 13 episodes, I feel that either it should be episodic, or actually make good use of the time it has. Gunslinger Girl just doesn't do that... it goes between too many types of genres and never comes to any sort of conclusion about the moral issues raised. Not to mention, it fails completely in a few situations where something (character bonding related) is built up, only to not have a conclusion. I really did expect a lot from this series, but left it feeling very blah. Though I did give high marks above to a few categories, that is because the series is good on a shallow level, but very unappealing once you keep watching it. Too many questions were brought up that were never addressed, too many people were introduced for such a short time, and in general, I walked away unsatisfied and disappointed. So, decide for yourself. ^_^ 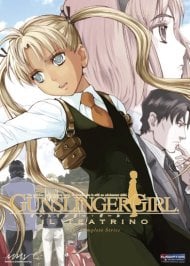 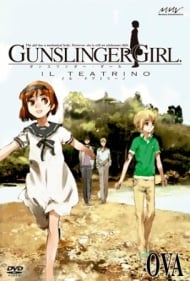 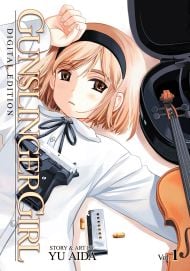