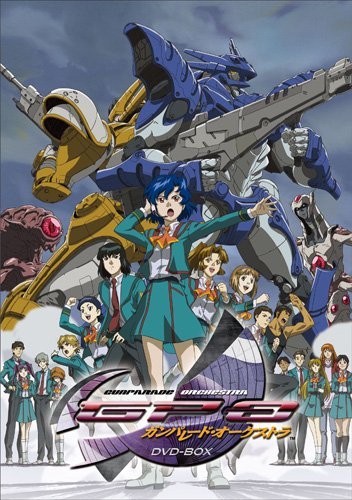 Notice: This review will cover both season of the franchice; because they are so bad, they don’t deserve a second. And if you are not fond of nerdraeg, don’t bother reading it at all; it is basically me describing how BAAAD it is in not so civil means.

Gunparade is one hell of a troll show when it comes to its premise. It regards a war between humans and aliens through the use of mechas. One will of course expect to see some sort of Gundam or Macross variant and to his amazement he gets slice-of-life. And indeed, the whole alien invasion is nothing but a poorly inserted element, being there in an attempt to fool the mecha/action lovers into watching a more than typical school romance show.
…And boy, did it fail hard.

To put it simply, the mecha action in this show is damn boring and hardly matters compared to some cheesy romance amongst high school kids. What you get is the usual “Oh I like her; does she like me; how will I reveal my feelings for her” stuff we see in romances, and just for the heck of it they throw in some rushed and boring missions to go fight some aliens, as intermission before more cheesy romance. So in effect the action is COMPLETELY OUT OF PLACE!

Thus in effect we get two different genres that try to get along with the neighbors in the same apartment block, but only end up becoming despised by all the other denizens. The slice-of-life/school-romance lovers will dislike the out of place mecha action in the show, while the mecha action lovers will dislike the presence of slice-of-life/school-romance, as well as poorly executed battles. How could it possibly work?

What the hell were the makers of this thinking anyway? That it would be cool to have romance blooming in the battlefield? If so, WHERE IS THE GODDAMN BATTLEFIELD? All we see is aliens wasting life on Earth for half a century and the last hope for survival is in the hands of teenage mecha pilots, who almost uncaringly go to fight them before returning to school and the usual romantic stuff. I mean HELLO you guys are the last remnants of humanity and the last hope for survival. Why are you all acting like war ain’t even there? And if the aliens managed to kill most of humanity, why are such an easy pray to a bunch of kids? Where are the special ops middle aged ace pilots? Why are the aliens invading Earth? What is their backdrop? Why is everybody acting so uncaring about all that? WHAT IS GOING ON HERE?

Well let me tell what is going on. Absolutely nothing; the scriptwriter had the mentality of a 5 year old while making this scenario and the developers didn’t even bother to think for 5 seconds how all this is total crap. It is all so autistic, you are simply not made to care or even tolerate the whole thing. It’s like you are living in a town overrun by zombies but you act like they are not there and keep going to work while they are chewing alive your neighbors. Complete and utter crap.

What is even more baffling is how this total tard actually got green light for a sequel. OH GODS OF HEAVEN AND HELL; THE PRODUCERS ARE RETARDS! No, they can’t be that GONZO-level stupid; they were probably bribed to go along with it. There is no other logical explanation… not that there is any logic at all in this show but whatever. So who are these idiots who did such a horrible thing anyway? Oh my, if it isn’t Brain’s Base; seems like they used as less brains as possible in this one.

Anyways, the second season would be a nice way to flesh out the setting and finally offer some answers that make sense. You know, like what do the aliens want or why is everybody so autistic about them. I don’t know if you can comprehend what I am about to say but they actually somehow found a way to take a crappy story and MAKE IT EVEN WORSE!!! They must be doing this on purpose, there is no other logical explanation, THEY WANT US TO HATE THEM!

So what is going on in this sequel of sorts that managed to do the unthinkable? Simply said, they offered even less context and went as far as going for unrelated stories, each time with different people, still trying to get a kiss from some girl while firing at the aliens. Not much of a story, no explanations, nothing worth to even bother remembering or at least NOT HATING! ARRGGHH!

This is one of the worst settings I ever got to watch (and I have watched a lot). Gunparade is what should be given to scriptwriters and producers as an example of what NOT TO DO!!! Seriously man, if you so much want to have a show about teenagers piloting robots AND include romance, at least try to make some excuses of how A connects with B instead of going all autistic about it. The average human being can suspend its disbelief only up to a point and not to the point it’s all looking like the Matrix.

… What? You want some info about the technicals like animation and soundtrack? SERIOUSLY? Why would you even care after all the stuff I have been writing so far? … Oh whatever, I will just tell you the very basics and be done with it. IT’S UNIMPRESSIVE, OK? The mecha action is boring, the mechas are average-looking, the cast is made up of generic school romance teenagers, and the music is completely forgettable. Yes, not even the exterior looks nice to give a good word about. IT IS TOTALLY MEDIOCRE! There, now let me wrap this up by simply saying DON’T WATCH THIS!!!

I'm going to divide this in three separate reviews for each of the three chapters which appeared in the whole story. Short of a small mention near the beginning of the latter two they are completely unrelated except for the fact that they all happen in the same universe.

Story: Well, to put it bluntly this didn't even come close to GunParade March and it was the closest setting wise. To put it simply, new commander, with wholly unsubordinate members. For me it failed, it didn't capture the mix of high school and military the way it should have. That's all I really have to say.

Animation: It wasn't that bad, nothing to write home about. The mechs were horrid. Unlike the trucks and the plane which seemed to blend fairly well into the background, they stood out like a red infected thumb in bleak white and grey that was the setting.

Characters: Nothing special. A lot of the same, insecure female lead, playboy, quiet kid, and the normal high school drama characters of the queen bee and such. Expected if nothing else. Okay but most of them just seemed flat.

Story: This one is a shot in dark, there were no mechs used by the main characters at all. They instead have pets, well, yeah pets. These pets are like giant dogs, or a tiger in one case. With a set of arms growing out of their shoulders. It's kinda strange but far from a spoiler. The story, was lacking. There was tension and some hurt feelings, but for the most part it just didn't click.

Animation: Again, like before nothing special. No real problems, most of the action was smooth and there weren't any major flaws.

Characters: A little better in the character department then what I was expecting. I hated them. To be blunt. They grew rather quickly for only have eight episodes in which to do it. The main Gen, was a child with a machine gun. CHARGE!, was the only thing he knew how to do right up until the last two. The rest, were there and had some interesting things to say but again it just didn't click into place.

Story: It's irrevelant. There is one in there, it's just so muddled you can't really pick it out. It has nothing to do with the genjyu or the war. Really I think it was just thought up on the spot to finish out the season at 24 episodes.

Animation: More of the same, the mechs don't even appear for more then a few seconds until the final episode.

Characters: We get a repeat back story from the Green Chapter. We also see a lot of the characters paired off in the same manner as a lot of crappy romances. Friend misunderstands something and asks around type thing. Oh well, it was a nice finisher. Two of the characters actually had a really nice thing going right up to the end, though you won't notice till it hits you in the face.

SOUND: Figure I might need to get to this now. It was good, the opening was nice and I rather liked it. The voice actors weren't bad, they fit the characters well I think. The sound effects were as good as I remember from GPM, the only thing that didn't work with me was the ending. It seemed out of place to me but other people might see it differently.

It wasn't a bad watch and I would reccomend it, good for a once over and that's about it though. As a note for those wandering, it's not a sequel to GPM. Think of it as being set in a similar universe, mostly because there is no mention of brains or PBMs at all in the entire season. Something else that bothered me and might bother you. In the white chatper, they talk about a beam gun, or beam cannon. I didn't see a single one. No beam fire at all. Actually, short of that first mention you don't ever hear about it again. Well enough babble. It's good for a single watch to kill time.