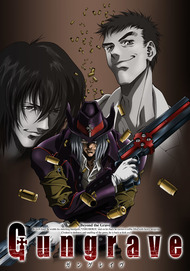 Brandon Heat and Harry MacDowel were best friends who lived by the law of the street, until one day they picked a fight with the wrong people and their life of freedom was suddenly taken away. With no one to turn to and nowhere to run, the choice to join Millenion, the city's most powerful syndicate, seemed like an offer they couldn't refuse. Now, amidst heartache, tragedy, and utmost betrayal, Brandon must take up the gun and help Harry climb the ranks of Millenion to succeed, in order to protect the people he loves, even if it means killing countless others in the process.

StoryLoyalty. Friendship. Love. Bravery. Trust. Greed. Conceit. Betrayal. Hatred. Regret. What is perhaps most amazing about Gungrave is the anime’s incredibly nihilistic philosophy throughout most of the show. In the first half of the anime, we see the characters striving to build up a metaphorical castle in the sky – an immense, ornate creation with no foundation to support it. In the second half of the anime, we see everything collapsing under its own weight, a house of cards built atop a shaky table. What should we devote our lives to, if nothing we gain has any long-term substantiality? Each character in the show seems to have a different idea. Some live solely to protect and nurture their sons and daughters, others decadently gorge themselves on the luxuries that money can afford, and still others simply live to kill other human beings. Brandon Heat, the main character in the show, devotes his life to something completely different: the devoted, unwavering protection of his comrades. Everything he does in the anime is motivated by this simple goal. Whether or not Brandon’s philosophy is actually sound is explored in detail throughout the anime. When friends can turn their backs on you, when loved ones can perish despite your best intentions, and when people you trust the most can betray you, is such selfless, thoughtless, and undying loyalty really the best way to live life? The answer that this anime comes to may not satisfy some people, but I found the ending of the anime to be an excellent way to finish an already outstanding story. The conclusion marks the end of an entrancing downward spiral; although oftentimes the outcomes of the show are obvious, this somehow doesn’t soften the impact of the characters’ fates. Interestingly enough, this “action” anime doesn’t really focus on the violence of the show at all; although the action scenes certainly aren’t bad, they pale in comparison to the absolutely amazing storyline. However, whether I was watching mindless action or the latest plot twist, I was seldom bored and was often immensely impressed.AnimationAnimation tends to be good in everything except for the action scenes. In some (not all) of these action scenes, I felt that they could have been animated more fluidly. I’d recommend that you not watch this anime for its violence, but for its amazingly captivating storyline.SoundThe music is definitely unique, but not really good. I didn’t find it particularly obnoxious, but at the same time I’m certainly not going to download the OST. However, to make up for the somewhat lackluster soundtrack, the voice actors do an absolutely outstanding job (judging by how many famous seiyuu are in this anime, I’d expect nothing less).CharactersWhile many of the characters feel a little flat (Balladbird Lee and Bob Poundmax in particular felt kind of like unnecessary speed-bumps in the anime’s progression), Brandon’s best friend Harry is amazingly well developed. In fact, there is a lot of evidence that Harry is the true protagonist, as he is by far the most dynamic character of Gungrave. Also, I found the turns that Bear Walken’s character went to be remarkably compelling. Furthermore, while not particularly well developed, all of the characters are interesting at face value. A lot of supporting characters are in the anime, and I find it amazing that I can still remember most of them a couple weeks after I have seen the show. The main character is not necessarily deep, but I found his stoic nature appealing.OverallIn the end, this series should appeal most to both fans of serious, plot-driven action anime like Berserk and Trigun. The story is gripping, and the action scenes are sufficient. In addition, fans of more cynical, experimental anime like Texhnolyze and Jin-Roh: the Wolf Brigade will enjoy this for the nihilistic themes present throughout. As for me, I think this is a great show that I will most likely revisit sometime in the future.

One of my personal favorites. I do reccomend skipping the first episode, its makes things a little confusing and gives away some of the story. This anime has a mobster, type of feel for probably 2 3rds of the anime. The characters are great, the story is great, the character development, at times can feel jarring! Towards the end it has more of a supernatural feel. Please please watch, great action, great great great character relationships and development, and drama included. 9/5/10