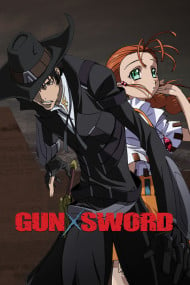 STORY: So I read a couple of reviews for the story of Gun X Sword before watching and everyone seemed to think that this anime wanted to be either Cowboy Bebop, or Trigun. After watching it myself, I think it's more accurately described as an animated re-imagining of the 1976 Clint Eastwood movie, " The Outlaw Josey Wales" (which in turn is a film adaptation of a 1973 novel), mixed with Gundam Wing, that takes place in a world similar to that of Trigun. Josey Wales is one of my All Time favorite movies, so needless to say I was a fan of GXS. The main protagonist Van, is on a mission for revenge against the man who killed his wife. Along the way he meets a girl who's older brother was kidnapped by the same person. Together (reluctantly in Vans case) they set out for the answers they seek meeting new friends and foes along the way. Unfortunately as the story unfolds, most of the main cast discovers to their dismay, that some of the most important people in their lives are on the side of the people they're fighting against. The story does lose some marks from me for being so obviously not original. Regardless of wether it seems reminiscient of Josey Wales like it did to me, or it seems like a rip off of Trigun or Cowboy Bebop, its clearly heavily inspired by something. Also there were some things that didnt completely make sense to me, like how the pilots of the giant robots (known as Armor) are always affected by the damage to their machines. On a positive note however, They do a really good job of telling the story at an efficient pace. Like Trigun or Bebop, the beginning of the anime is just a bunch of random episodes introducing you to new characters, and letting you get acquainted with their skill sets and personalities, while they have random one-off little adventures. What I feel GXS does better then those two titles, is that they always have the main purpose of the story lingering in the backround, much like One Piece, or Full Metal Alchemist did a few years later. No matter what exactly the characters are up to, they are where they need to be, doing something they need to do, heading where they need to go, in order to accomplish their ultimate goals. ANIMATION: The Animation for this series is better then average, with moments of being good (especially in the openin theme). Some of the character designs are a little basic, but they are made up for by the designs of the Armor in my opinion. SOUND: During the episodes, the sound aspect of the series does its job, and the opening theme isn't that bad, unfortunately I could never get into the closing theme. CHARACTERS: This anime could have had one of the best cast of characters in any series if it weren't for the two main characters. Now, I don't hate, or dislike either Van or Wendy, but I also don't like either of them. They're just kinda there. Van always tells everyone to go away and leave him alone, he doesn't want to sleep anywhere but outdoors, and the only time he shows any emotion is when is in a fight, or when he eats some food that he likes. The guy's practically got every woman in the show chasing him around and all he cares about is how spicy his food is. And Wendy is just a naive, clingy little teenage girl, not to an over the top, annoying point, but thats just what she is. As i said, i don't hate either of them, both of them have honorable intentions, tragic backstories that somewhat explain why they are the way they are, and they are both brave. Van is incredibly skilled at what he does too. Fortunately for this series the supporting cast is on of the better supporting casts Iv seen in an anime. On a side note...apparently Lain, from Serial Experiments Lain, is Wendy's (the main female protagonist) ... brother? .... if you see both, you should understand what i mean. 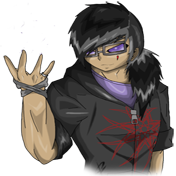 I had a blast watching this anime. I really liked it, it was an old west type deal anime but only in the environment, for some reason it doesn't give off so much gun action as opposed to the mecha action. And the "entrance" that has to be done each the giant robot comes out doesn't really wear you down as opposed to other entrances or transformations like digimon frontier. Van is a badass and Wendy is so awesome. It really helps to kill some time. I'd recommend it if your looking for the type of anime with a journey where a character must discover himself to save himself.

This is an example of a product that is overstuffed with cloned material from successful anime, and as a result it resembles a horrifying Frankenstein monster of shows you like, and like Frankenstein's monster, it's ugly and likes little girls.The main character "Van" is a clone of "Vash" from "Trigun" and "Spike" from "Bebop." He's on a vengeance quest, hunting down the man with the clawed hand, which thrusts you into the storyline of "Trigun, Cowboy Bebop, Blade of the Immortal, Samurai Champloo, The Fugitive, etc, etc." It's not a bad premise, but it's been done to death and this show doesn't offer anything new to it.Van's weapon is sword, that's also a whip, and also calls a robot from space. All the bases covered yo! That part is not too bad, as the animation is good and if the show would have just resigned itself to nonstop action then we might have something here.Action takes a back seat to a plethora of side characters that are predominantly female. They're all there. The cute, plucky girl that's looking for her brother has a childish insight that consistently digs up bottomless pits of tired morals, and offers to marry Van in the first episode. There's the older, heavily busty, gypsy, vagabond, rebel that's too cool for school but carries a weathered heart of gold and who would also lay down for Van in a cheap second. There's the Mech driving pixie that wants to have fun and fight so she naturally sees Van as a challenge in the cockpit and on the cockpit. Anime shows that are girl crazy and laced with Lolita complexes are rampant and sometimes work, but it hurts Gun X Sword BADLY.The comedy is there and almost makes you laugh, but doesn't. The fights are there and are almost cool, but instead neat.All in all, this is a show that serves as a perfect example of why taking every successful aspect of popular shows, eating them and crapping them out still just smells like crap. As a S.A.V.E. title with good animation and standard fan service, you can enjoy it for what it is. If you've seen a lot of animes though, you'll fall asleep on this one and be glad that it only took a small toll on your wallet and your time. 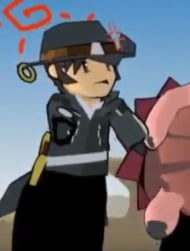 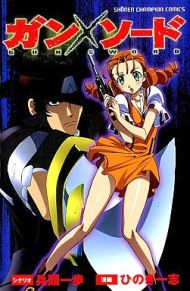