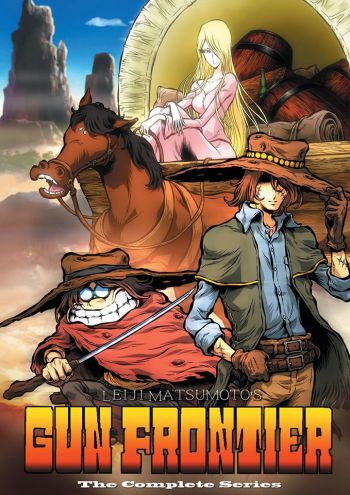 Okay, first of all I'm giving this a high score because I think it's truly a great mixture of of what has made Leiji Matsumoto's stories great.  I was first hooked by Galaxy Express when I saw it on the Sci Fi channel in the early 90s, and since then I've seen everything I can get my hands on from more GE999, Harlock and all the other stories in the Leijiverse.

The plot over-all deals with Torchiro and Harlock wandering America's wildwest in the 1800s with a woman named Sinonora.  Torchiro's people were killed in a village called Samurai creek, save for a few survivors who he's now looking for.  The adventures Torchiro get's into are pretty hilarious and usually dangerous, and Harlock is usually tagging along so you know everything will be okay.  The show deals with a lot of racist(which is where half of the jokes stem from) and a lot of sexy scenes or nudity(which is where the other half of the jokes come from).  Mix there with the epic gun battles, sword fights, and cheesey narration and you have a delicious Leiji-casserole.

As it turns out though Torchiro's gonna have a hard time finding survivors because the people behind the attack on Samurai Creek are part of a mysterious organization that runs "the entire world".  His people were sold and killed and such just like the American Indians.  He tries to find his people and a wife, all the time wondering about his insecurities with his appearance and race; he can usually brush it off though because his friends are there to cheer him up and he general ends up in a decent position at the end of each episode. (I don't wanna give much more away)

As far as audio goes it was pretty good and I was glad to hear Steve Blum(Spike Spiegel from Cowboy Bebop) doing the voice for Harlock and the voice actor for Torchiro was magnifacent(I watched the series with both Japanese and English audio) though the narration was beyond foolish, almost to a point of an idiot philosophy, I thought it was funny and added that campy charm to this comedy.  That's one thing you needta remember: watch this as if it were a comedy that takes itself a little bit more seriously sometimes, because that's what it is.

There are a few scenes that gave me chills and tugged on my heart strings though, because I've known these characters for so long and the character development is pretty good(a little slow sometimes, but GE999 had tons of episodes and I think Matsumoto-San is used to drawing his character's personality portraits over years instead of hours.

Down to the art now; I love the way they did the animation for this, I absolutely adore that they were able to update it and maintain the old style so amazingly.  This was one of Leiji earlier works, but wasn't made into an anime until 2002. There are some minor short-cuts here and there, like less detail on the shots that are further away but we see that a lot in anime, so I think it's forgivable.   They also designed Harlock and Tochiro's get-ups perfectly, even though tochiro's is pretty much the same.  As usual most of the men are ugly and mishapen in a hilarious way and the animals are cute and funny; though all the women still look like Maetel, or Tetsuro Hoshino's mom.  And they're nippleless as usual.

There are themes that are reused in some episodes, though it's usually something that's believable for the wildwest.  And some of the elements used in the show feel like something out of Trigun or Outlaw Star, but these are things a lot of anime use and I'll give it to Matsumoto since the manga came out in 1975.

All in all I think this is a great anime that Matsumoto fans will thoroughly enjoy, it's great to see out friends in another alternate timeline.  Give a try dammit.

This show reminds me a lot of Trigun. A man on a journey to do something and as he travels, he picks up a bunch of people to be part of his group. Now, unlike Trigun, this is placed on earth and in a time when the west was still young. A man lived with a gun at his side or would end up dead.

The story revolves mainly around Tochiro and Franklin Harlock (the guy that looks like a western version of Captain Harlock… put two and two together) as they travel. At first, all you know of these characters is that they are somehow connected and are a bit miss matched. When we do find out when they met, it feels a little forced although ties Harlock’s past as a pirate with the sword duel on a ship. (Ok, can I not spell this out enough? They took the Space Pirate and put him in a western show.) I would have loved to know a bit more about each character’s passed; we barely get anything about the background of any of them.

When talking about them separate, it’s just a little hard because they play off each other so well. Tochiro always respectful and talks about finding his people. He is a true samurai of old times and never really faulters in how he acts to women and respectable men both. Harlock always ends up saving Tochiro when a blade didn’t come in handy. He’s rather quiet and is pretty much the silent type who doesn’t really go out of his way to do something for his buddy. The two never let anything come between them including a women which can make them a good candidate for a bunch of fan art…

For Simunora, we never learn very much about her and I felt rather confused when she did what she did. The only thing you learn really about Sinunora is that she is French (really… how original… a French woman trying to get into someone’s pants, thanks stereotypes…) and that she might know something about what happen to Tochiro’s people. She tries to get in the middle of them but most of the time they don’t listen. In fact, the time one of them almost got to sleep with her, she pretty much had only teased them and shot them down. It got so bad that I was thinking ‘Just kill her or force her’ just to get her to stop.

As the story goes on, the only character that really grows is Tochiro and that’s not saying much. The only way he grows is that he seems to get a bit better at the sword (like he wasn’t a expert already?). The ending is rather stupid and a big cliffhanger. You are just crying out to be able to see more but it gives you a big middle finger and points to a manga that I don’t think has been translated yet.

The art style is very vintage even if this show is from the 21st Century. I think it is partly a look to the old show ‘Captian Harlock.’ Though Captain Harlock was set in space, this doesn’t have anything really to do with space and the he was only a sea pirate instead of anything more. This is not for little kids. Many times, Sinunora ends up striping for someone or getting her clothing torn off. They do not show much of her privates but you still see a lot of her and it is implied. Now most of the side characters look like strange morphed creatures including Tochiro sometimes and normally it seems that most men look like pigs while women look so beautiful.

The voices, well, they pretty much are good for a low budget film but none of them really stand out to me. It’s sad really but it does happen. The English is a bit better then the Japanese in this case but there isn’t much difference.

In this wild west anime, Harlock and Tochiro are gunslinging wanderers in a desolate wasteland. They meet up with a mysterious woman upon escape from a corrupt town. The animation in this series is bizarre. Many characters have eyes that are ridiculously close together and their heads are peanut-shaped, making them resemble horses. It wasn't a bad story overall, though.