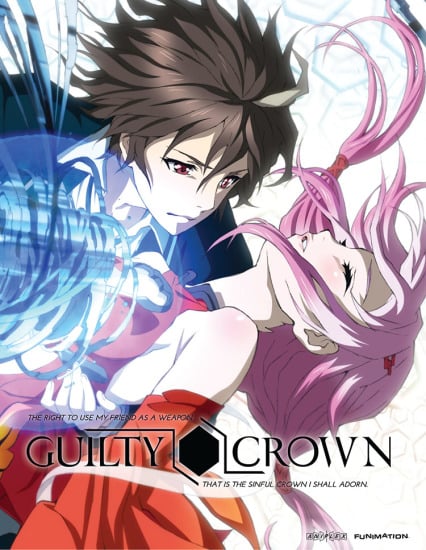 So I felt that nearing the end of the Deadman Wonderland series these two are really similar, but most of that are spoilers so I'll just stick to the basic stuff. Both are Sci-Fi's about a guy who gets involved in a world to be honest he doesn't want to be there. Then there are a load of similarities about the relationship between the main male and female, Ganta and Shiro in Deadman Wonderland and Inori and Shu in Guilty Crown. Involving childhood and the effect they have on their friends, Personally I think that whoever watches or reads one they should like the other.

Both feel very similar to each other. There is a similar underlying plot (the main characters both have unusual powers) and the characters are all quite similar. Deadman Wonderland is a lot more openly insane, whereas Guilty Crown is more subtle, but if you liked one you will probably like the other.

Four years have passed since the final battle between Celestial Being and the UN Forces, but Setsuna and the Gundam Mesiters face a new adversary - the A-Laws! The battle to unite humanity continues!

The year is 2307 A.D. Although fossil fuels have been depleted, humanity has obtained a new source of energy to replace them in the form of a large-scale solar power generation system based on three huge orbital elevators. However, the benefits of this system are available only to a handful of major powers and their allies. The three orbital elevators belong to three superpower blocs. These are the Union, led by the United States of America; the Human Reform League, led by China, Russia, and India; and the AEU, led by Europe. These superpower blocs continue to play a grand zero-sum game for the sake of their own prestige and prosperity. In this world of never-ending conflict, a private armed organization appears, dedicated to the elimination of war through armed force. Its name is Celestial Being, and it is in possession of "Gundam" mobile suits. With these Gundams, it begins armed intervention into all acts of war.

The World may be United but the time has come for Celestial Being to begin their interventions again.For all of those who stand up in answer to the call, irreplaceable "Bonds" exist.

In a dark future, a biological disease that transforms humans into monsters called the Kamiyadori plagues the city. The peacekeeping forces include a specially trained team called the the Right Arms. These agents must keep tight control on those who are infected - and the only salvation they offer is execution! But when one Right Arms officer is unable to kill a young boy and his sister, he sets off a chain of events that may bring a ray of hope to a world filled with despair and chaos...

Star Wars: Return of the Jedi

In the final chapter of the Star Wars Trilogy, Luke Skywalker returns to Tatooine to rescue Princess Leia and the frozen Han Solo from the clutches of the ruthless gang lord Jabba the Hutt. The Rebel forces also discover that the Empire is constructing a larger, more powerful Death Star, and they set a dangerous mission to destroy it and topple the rule of the Empire once and for all.

Fleeing from the evil Darth Vader and the Galactic Empire, Princess Leia sends her two androids C-3P0 and R2-D2 to the planet Tatooine, in hopes that the top-secret plans to the Empire's secret weapon reach former Jedi Obi-Wan Kenobi. The two droids end up at the hands of a young orphan named Luke Skywalker, who then teams up with Obi-Wan and renegade pilot Han Solo to rescue Princess Leia from the Empire.

In this futuristic world, humans are ruled over by faeries. The young master Yue Hu encounters the fairy Fei Liai, and gradually uncovers the truth and dark secrets behind them...