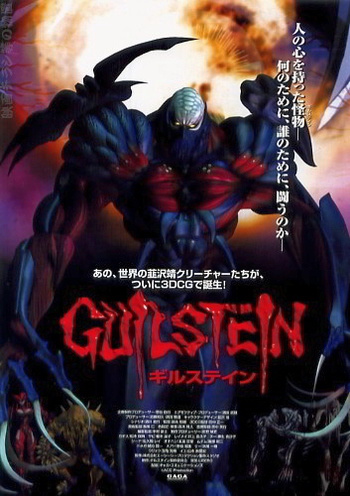 Massively underground, hipster obscure movie from the 2000s that nobody watched because it sucks ass and the only real dub/sub is in Russian. Which makes it the best obscure, hipster, underground pick. But enough about hipsters, for let me tell you about the raw deal.

Raw deal being watching it raw. But the plot is easy to follow. I'll also explain it because there is no synopsis. World gone to shit, the have-not peasants are rebels or some shit. Out pops Guilstein! CGI monster! Claws! Spawn! RAWR! And he like... saves this hot chick when she was chased by not-Guilstein, she brings him to her hot possibly sister, big guy, hacker girl and old man. Then you get a 40 minute flashback on how Gulstein became Gulstein.

It's not big on plot, or writing I assume, but it's just an excuse for CGI monsters to do CGI things and improper clothing on females. But also proper. But my point is, is that the story that is there, probably and most likely sucks eggs. But I do respect the rebel proletariat revolution against the corrupt anti-ethics bourgeois oppressors with their gestapo.

I can't state it enough, but CGI in 2002 should not suck this much ass. ReBoot was a 90s show and one of the first fully CGI shows ever and it can still hold up. Guilstein, holds up as well as a tower of wet shit in a hot summer sun. Like there is no justice to the shit CGI and it is seriously, ridiculously, bad. Not that it clashes with traditional anime animation, which it does, but oof. It's also a sight to see as sometimes it becomes so bad it's goodbad.

This next one, it deserves it's own section. One guy, when walking with his homie down a hallway, his ass was poppin'. Like bouncing up and down despite not having a thicc booty. That was amazing. And some of the character designs? Totally hawwwwwwt. Like girl at the start, or possible sister, they are hot. Banage over boobs is always fashionable. Doctor Scientist with the green eyes? Hell to the yes. And this chick later on, not red but this other one, super hot. Some nice character designs and hairstyles befit of the time period the show was made in.

Although, there are a lot of jarring cuts where in other, more competent shows, would make for an actually good cut between scenes, like smashing a door and cutting to a different door getting smashed.

This OST slaps. It's all over the place! Tony Hawk kinda shit to hard rock, smooth jazz, more hard rock, ballads, some mix of hard rock, ballads, and some dance funky pop kinda shit- llike that last one? That was bananas. And the EP? That is the quality shit you'd expect from some shit ass anime that has the most baller EP. That is straight up money. This OST is so good, you'd think it was from the 90s.

The side characters are pretty neat, not super in depth but still neat. I assume they got some backstory or details to them, like why Tape Boobs has no pants, or why a kid can hack all kinds of shit. Even Guilstein got some background which is super impressive. This really doesn't matter.

Become the hippest kid on the block when you see this underground hipster pick! 18 people saw it, 25 with DTAB, and you get the finest in Russian dubs! It may not be much to look at, overly long, bad animation, questionable most everything else, but it has some light fanservice and a surprisingly slapping OST. Also like 90 minutes so probably not but still, it's a relic and something few have seen. Despite the score, check it out.