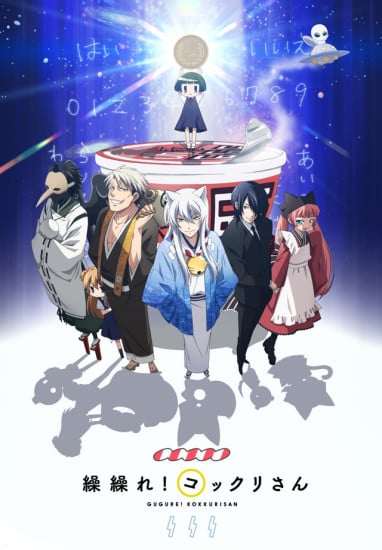 Gugure! Kokkuri-san Episode 9 - The Age of Many Worries!

Kokkuri-san regularly uses yellow hair dye while in his animal form. However, when Shigaraki says using hair dye will make him go bald, Kokkuri-san is struck with fear. That night, he loses handfuls of hair while taking a bath, and hairballs thought to be made of Kokkuri-san's hair appear in the hallway. His fear of going bald suddenly swells!

A Refreshing Smile is the First Step Towards Becoming a Real Human!

Inugami, Stay! Go to Your House!

The One on My Mind is Into Sci-Fi!

The Flowers on the Desk are a Message!

Kohina, the Cyclops, and Shigaraki!

The Age of Many Worries!

Both of these animes are funny and feature kitsune main characters, as well as, other yokai type characters. Although, Gugure! Kokkuri-san is more 'slice of life' and Kamisama (Kiss) Hagimameshita is definately 'shoujo' style. If you like crazy family antics and endearing characters, you will enjoy both of these.

I totally agree with the first person that did this reccomendation. Endearing characters and funny situations on both sides in a similar setting.

Despite the face that Gugure is not a romantic comedy (Like Kamisama Kiss) It isn't so "far out of reach" to find your self liking both of these animes. Gugure is about an elementary student named Kohina who lives all alone. One day she accidentaly summons a fox spirit, who ends up playing surrogate mother to this lonely, cup noodle obsessed, "doll" like little girl.  Kamisama Kiss on the other hand is a romantic comedy about a teenage girl named Nanami.  She accidentaly becomes a land god, and ends up falling in love with her fox demon of a familiar.

Both of these have similar supernatural elements to them, and protagonists with foxes looking after them. If you're looking for more laughs than romance, then Gugure is what you need. However if you find yourself in the oposite position then watch Kamisama Kiss.

Japanese Hell consists of 272 subdivisions, and the demon Hozuki is tasked with making sure they all run smoothly. Calm and level-headed, he efficiently navigates Hell's internal affairs while his boss, the Great King Enma, is busy judging the dead. Although Hozuki has a soft spot for cute animals and is known for his love of gardening Goldfish Flowers, he's...

These shows are so stupid that they are funny. They have similar humor and bizarre characters. Gugure! Kokkuri-san has shinto, while Gintama samurai.