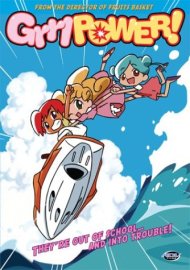 Need some help? At the Irakura agency, the young Umi, Sora and Ao take care of everything from delivering items to defeating monsters -- for a modest fee. Need a date? Having problems with your homework? There's nothing this young trio can't handle -- until now! When a distraught mother asks the girls for help getting her son to go back to school, Umi, Sora and Ao soon discover they might have a lot more to teach the boy than good attendance!

StoryI have to say, I was very unexcited for watching Grrl Power. I wanted to add it to the AniRec (and get a DVD for the prize pile), and expected some sort of PowerPuff Girl-style nonsense, but instead was pleasantly surprised with what ended up being an entertaining story. The premise is simple: 3 young girls run a business called Irukuya where they complete odd jobs, no matter how big or small the task. Sort of like Get Backers, but with a younger and lighter feel (and no crazy battles). The crux of the story involves one job: to convince a young man to go back to school. He’s opposed to the idea, of course, and decides to join the company instead. After completing all sorts of unpleasant odd jobs he starts to question whether his choice was the best. At only 25 minutes in length, it’s hard to have any sort of a dynamic or complex story, but Grrl Power didn’t really need one. Think of it as a brief slice of life piece that takes place in the life of three rambunctious kids. It has comedy that makes you chuckle, some light action, and a charming story line. There’s not much to dislike, really. It’s not too kiddy for the adults to watch and not too adult for the kids to watch; so for the most part, Grrl Power has an accessible and pleasant story that will probably appeal to all ages. AnimationThough different in nature, the animation of Grrl Power impressed me. Character designs definitely are minimal and aimed at a younger audience, with small arms with round hands, very simple shading, and a very cartoon look. Colors are bright and vibrant, and the shading on things like background objects (such as bushes) is layered in an interesting way. Plenty of emoticon type graphics are shown as well, like angry lines jutting out and other things. Overall I was quite impressed with the simple yet effective animation. SoundGrrl Power’s music is nothing to scream about, but it isn’t bad either. Typical kiddy synthesized beats dominate the 25 minute OVA and the menu screens. It fits perfectly with the tone and feel of the anime, but doesn’t stand out enough to warrant a super high score. The voice actors do a great job in the Japanese track. The English voice actors are for the most part very good, except for the annoying mispronunciation of things like "Irukuya" to "Irukiya". CharactersI enjoyed the set of characters, which is rare for such a short piece. The girls, Ao, Umi, Sora, are likeable in their own ways. I have to say I was confused for a while at the sign language, until I discovered (only through watching the special features) that one of the girls is deaf. Wow, that was news to me! The secondary characters are entertaining as well, especially the old grumpy man who badly wants the girls to fetch his lost ring. He provides the main comic relief. OverallI expected Grrl Power to be shoujo girly nonsense, and came away impressed. It’s short, it’s light, it’s entertaining, and there isn’t much to dislike about it. If you hate things like this, don’t give this a watch. Otherwise, there’s not much to complain about. It’s not deep or thought provoking, but at least it’s a good 25 minutes of mindless entertainment! Check it out. 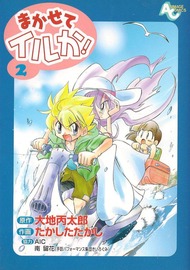