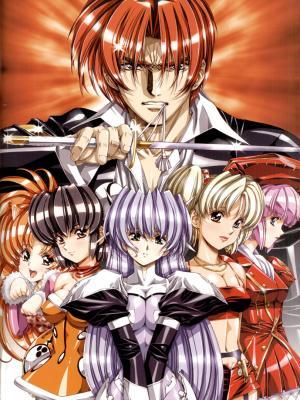 Story
Having never played any of the Growlanser games, including IV, I had no idea what to expect when watching this. Admittedly, I know that the series of games is tactical and strategy in nature, so I suppose I did have an idea that the plot would be mostly political. Needless to say, I was correct, but also ended up being quite surprised at how decent this one shot OVA really was.

Since it's related to the game, and since the length is only around twenty minutes, we are introduced to a whole lot of plot in a whole little time, which can lend to a some confusion. A narrator explains that after a great war, three countries formed a confederation comprising of five nations, but were met with resistance. Fast forward to the present, to the capital of Valencia, and a rebellion is being planned. Lady Silvernale is privy to this information and is faced with a choice: let the rebellion occur to avoid casualties, or risk bringing civilians into the middle of a war. Luckily, she has friends and allies to help, including delegates from other countries and a group of heroes. Over the course of the episode, we see Lady Silvernale make important decisions and choose where her loyalties lie, all to help out her country.

Though short and unfinished, I enjoyed this OVA. I've seen quite a few game-to-anime teasers, and with the majority of them, I could care less about playing the games afterwards to see the rest of the story. In Growlanser IV's case, however, I definitely would be interested in playing the game (if it was ever localized), to see what happens next. The plot was intriguing enough without being overly complicated or confusing, and provided a good look into the realm of the game. While slow, the pacing was still appropriate for the amount of political turmoil going on. And really, it was mostly eye candy anyways, so the slow plot was merely in the background compared to the beautiful visuals that are shown. If you are looking for something with great substance or plot, this might not be the right thing to watch. Then again, if you are looking for a political fantasy with an interesting plot that is probably fleshed out in the game, look no further.
Animation
There's no denying it: Growlanser IV is beautiful. The character designs are detailed and have flowing hair and brilliantly colored clothes, the backgrounds are lush and full of vibrant colors and plenty of detail, and everything about it screams "I'M A GAME". Then again, there were also some downsides to the animation such as way too developed breasts (a problem with many series, it seems), a sometimes crude level of detail that was seemingly random, and worst of all, very jerky fighting scenes. Nonetheless, the overall animation quality was quite impressive and easily worth watching this OVA for. One thing to note is that there is a little bit of CG used (near the beginning), though I don't think it fit well with the rest of the animation. Definitely not 100% out of place, but the blending was a bit crude.
Sound
As with most game-to-anime transitions, the music definitely sounded like it came straight out of a console RPG. Unlike other attempts, it worked quite well in this case. Fairly light synthesized tracks were used for the majority of the scenes, with a slightly darker tone for the suspenseful scenes. Though appropriate and a good fit for the story, the music was still nothing incredibly exciting, thus a decent score of 7. Voice actors did well for everyone involved.
Characters
For such a short anime, it's hard to judge this section. We are introduced to a variety of characters, the majority of which we don't really understand or feel close to. Lady Silvernale is probably the most developed of the bunch, but only by a small amount. Consequently, she was also my favorite character, having a very strong will and determination to save her kingdom at all costs. Other major but still secondary characters included the uninteresting prince and a group of heroes that we know nothing about (except that they can fight well). A plethora of names and a total lack of backgrounds or more detailed information made the characters not easy to empathize with, or care about. I understand that with only twentyish minutes to work with, it's unrealistic to expect a thorough history of each character. Still, it would have been nice to either cut back on the amount of characters introduced, or at least try to give a minor introduction to each one. Regardless, I felt that Silvernale's character made up for the lack of information on everyone else, so I still would rate this section a 6. I'm sure if you played the game, you'd appreciate the characters that much more.
Overall
While short and somewhat confusing, there is little to dislike about the Growlanser OVA (except the open end, which should be expected in an anime meant to be an introduction to a game). The lush fantasy world is beautifully animated with vibrant colors abounding. The music is fitting and feels like it came straight out of a game, and the plot is politically interesting in its own way. The excess of characters definitely could have been changed, but in general, I found this to be a pleasant viewing. And hey, at only twenty or so minutes, what's to lose? If you like fantasy or anime that comes from games, you'd probably enjoy this.