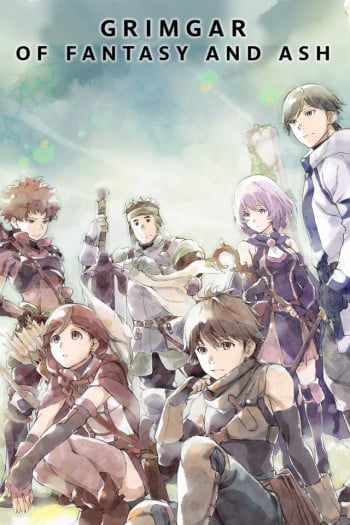 If you're looking for manga similar to Grimgar of Fantasy and Ash, you might like these titles.

Re:monster isn't as serious as Hai to Gensou no Grimgal but still has similar adventure aspects. Where you have characters begining from the bottom and working their way to becoming stronger both as an individual and as a group. Which in my opinion is great. I love the idea of self improvement through hard work or as a result of experience. Definately worth the time to check the manga out if you enjoyed Hai to Gensou no Grimgal.

Mikami’s middle age hasn’t gone as he planned: He never found a girlfriend, he got stuck in a dead-end job, and he was abruptly stabbed to death in the street at 37. So when he wakes up in a new world straight out of a fantasy RPG, he’s disappointed but not exactly surprised to find that he’s not a knight or a wizard but a blind slime demon. But there are chances for even a slime to become a hero …

For those of us who enjoy stories of new begining in a world unlike our own where there is a chance at something new and far more extraordinary than our present lifes permit. I would recomend this manga if you enjoyed Hai to Gensou no Grimgal. The manga doesn't take as serious an approach to life and death struggles but still has many of the same elements which you'll find enjoyable.

Minato is a college student who died in a plane crash and was reincarnated in a fantasy world. He was raised alone in the wilderness by his succubus mother, and now he tries to make his way as an adventurer

A high school student that has lived as a mob-character, Mimori Touka. During the school trip Touka and his classmates are summoned to another world.According to the summoned goddess, summoning so many best ranks like S-rank and superior ranks like A-rank heroes like this is very unusual. However Touka was the only with the lowest rank, he was an E-rank hero. The status is overwhelming low when compared to his classmates. Moreover Touka’s peculiar skill is supposed to be an absolute failure 【Abnormal State Skill】and… Thus the former mob-character and abandoned hero, will absolutely become the strongest devil as he advances and strikes back.

The strongest doesn’t need cheats. Haruka, a high school bookworm who spends his life as a loner, is suddenly summoned to another world with his classmates. Noticing the god in front of him, Haruka knew he was going to get cheat abilities by freely picking what he wanted from the skill list so that he could live in the other world - or so he thought. The skills were first come, first serve, and guess who missed out? After being saddled with the “loner NEET” attribute, making him unable to join any parties, he realises that even in another world, he’ll have to adventure in solitude. Haruka, recognizing the dangers his classmates will face, decides to secretly help them out while not relying on cheats. He’ll surpass even the most OP as he walks the path of the strongest.

Slime's up for one recently deceased middle-aged businessman! When the gods reincarnate him in another world as a boy with magical powers, he discovers that magically tamed slime are an untapped natural resource!