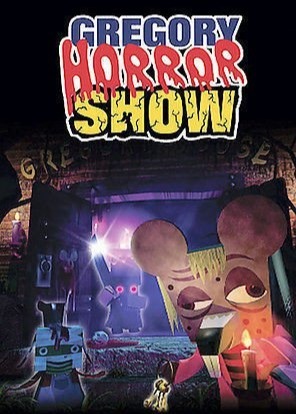 Story: The series is split into four parts. The first two center around a guest staying at Gregory house, the third takes place on a train (a prequel) and the last part takes place in a hospital (or a renovated hotel.) The first two parts are easily my favourite. The show puts you in the shoes of the guest so you basically see everything through their eyes. I really like this format as it made me feel more involved with what was going on. The setting of the hotel itself was also great. Very dark and spooky like something out of a classic horror film. The last train and the bloody karte case definitely had their moments but they just didn't have the same impact on me overall.

Animation: Well it is a CGI show and it hasn't really aged too well... But it still has a certain charm to it that works (for me anyway.) At the very least it's still better than Funny Pet's animation.

Sound: I watched the English dub for this and the voices were all pretty much perfect. I especially loved Gregory's voice. The music was also fitting.

Characters: My favourite part of this series is definitely the large cast of unique and interesting characters. A lot of them don't get too much screen time but they're all memorable. Gregory would have to be my favourite here. He was just such a great character who managed to be both funny and creepy.

Overall: I would recommend this to anyone who enjoys unique anime and isn't picky about animation. It may not be a perfect series, but it's still a lot of fun to watch. This would be especially great to watch on Halloween.

Looking for a unique anime with animation fit for children but a story and mature themes for adults?

Zany characters: including an innkeeper out to get the guest, a chef who hates a certain drug, a doctor who’s a danger magnet, a nurse with a unique fetish, a soul consumer, a child who is more or less than she appears, a trickster grandchild, and a narrator who may have a third eye.

There are four seasons - combined into one entry on A-P - the first two feature a different guest. Each guest gets 25 episodes that  have the viewer wondering why they didn’t leave after the first. The first is a guy, the second a girl, and both times YOU. Yep that’s right, the viewer IS the guest.

The third season takes place pretty much entirely on a train and focuses on Gregory whose headed somewhere and he meets quite a few people on the rails, his grandson has tagged along to be a thorn in his side, and he is tasked with discovering a mystery he never thought about before.

The fourth season centers on the nurse, Catherine who’s got an obsession for that life pumping fluid, blood. For 11 episodes you’ll get to see her go gahgah for the red stuff and for something else as well. For some reason episode 8 is more about Gregory and his inappropriate behavior though Catherine is in it. The story could and should have been placed in the previous season. Almost seems like the creators forgot to tell the story or just felt like taking a break from having Catherine be the center for a short while.

The story for the first two seasons is all about emersion and the “camera” loves to zoom, swivel, back-up, and twitch. The feel is not completely off-putting, its uniqueness hold ones attention and the desire to find out just what is going on should keep you busy though it may induce some motion sickness. The first-person gaming perspective keeps the mystery and the “this could happen to anyone” thought in the forefront of the viewer’s mind.

Pretty much the entirety of the first two seasons takes place within “Gregory House” but there are some outdoor scenes that give a change up to the typical setting. They sometimes lean towards being more comical and light on the horror but are no less captivating.

The this is happening to me feeling from the first two seasons is absent in the last two and pulls the viewer back from the horror. The horror itself decreases and there’s far less jump moments. The comedy is still present but it doesn’t have the same flare and it was smart of the creators to pull back the episode count, especially for Catherine’s story. The interest in Gregory House could have been finished with the first two seasons or a third guest could have been targeted. Either option would have probably served the anime as a whole better, though the point is somewhat mute as this ended back in 2001. If a remake or a continuation were to appear this reviewer hopes they can capture and increase the thrill of the guest for target practice.

While the eps run time is 2 minutes and twenty-seven seconds stopping after one or even a dozen is not recommended or probably possible. Once you are in you are in.

Your mind is not safe.

Dare to explore this creepy 88 episode anime and you just may find it too spooky to sleep or visit any hotel establishment.

Remember, it was your choice.