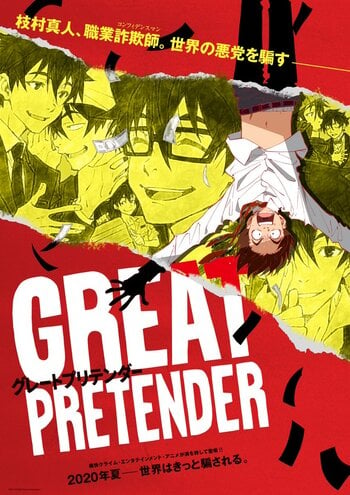 One night, senior high-school second-year Nishina Airi is abducted. When she wakes, she is trapped in an uncanny, isolated space with other students from her high school and forced to take part in the “Werewolf Game”. Thus, a death game filled with fear and terror that would pit “Werewolves” and “Villagers” against each other, force them to murder – a game with rules so absolute, defiance is punished by gruesome death – begins.

Reiko finds a starving mysterious animal that looks like a cat with wings. To the girl's surprise this cute animal names itself a space salesman that would sell advanced technology to humans for just a bit of hahise, which is abundant on Earth. But what is hahise? Would you pay it for a machine that can copy anything?

Japan is now the 51st state of the U.S.A..The isle of Neon, located near Japan, is the only place where prostitution and gambling are legal. There, Italian Mafia, Chinese Triad and Yakuza fight each other to gain the control of casinos and brothels.

World War III has left Earth's surface uninhabitable, forcing humanity to relocate to underground cities. However, these subterranean metropolises cannot produce enough food for their inhabitants, so the highly addictive “Pure Trance” life sustaining pills have become the bulk of the citizens' diets. But eating Pure Trance tends to cause eating disorders such as hyperorexia - extreme overeating - and it's up to the spunky, scantily-clad nurses of Overeaters Treatment Center 102 to help their patients beat the disease. However, in addition to dealing with demanding patients, the girls must also cater to the whims of Keiko, the sadistic, drug-addicted hospital director. How will the nurses fare, stuck between an unbearable job and equally miserable prospects outside of the hospital?

They believed that every time they took a life, they brought happiness to another... Before becoming Night Raid's deadliest ally, Akame was a young girl bought by the Empire and raised as an assassin whose sole purpose was to slaughter everything in her path. Because that's what makes people happy...right?

Takahisa and a group of students in a university club head to the remote Kichiku Island in search of ruins, but they're immediately attacked by a large man in a pig mask, and their boat sinks, leaving them stranded. The group quickly discovers that the island is inhabited by bloodthirsty cannibals, but there's more going on at Kichiku Island than meets the eye...

In the year 2000, a Chinese nuclear experiment went wrong mid-transit, resulting in Japan falling into ruin. Those who survived were housed in Japanese based American military facilities to escape from the deadly radiation and learned to live following regimented lives of labor and learning. To relieve the boredom, a recreational drug called "Zero" was created and sold illegally. Taking the drug induced a dream filled sleep where people saw their lives as they were in the year 2000. And in the cases of those who hadn't been born before 2000? The most they could surmise is that they saw who they were in their past lives. But it seems something is brewing below the surface, and those past lives may just hold the answer.