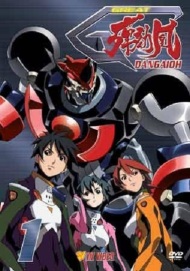 A mysterious explosion on Futagami Island begins a new chapter in the Dangaioh mythos! Witnessed as a bright light up in the sky by only one young girl, the arrival of a mysterious someone in the sky may or may not be a signal for the end of the human race. Flash-forward to ten years later when led by the evil Professor Katou, a band of warriors calling themselves the "Tartarus Knights" have, thanks to the help of four mighty generals, begun their campaign to lay waste to the world. Their final objective? A small research station on Futagami Island. Katou's victory seems almost certain - until he encounters an advanced fortress guarding the island. From it, a group of three humanoid robots are launched.

685 users are tracking this. Log in to see stats.

Haja-Kyosei G Dangaioh is not a plain mecha series as it mixes elements from other genres, such as harem (dorky protagonist, plenty ecchi jokes) and fighting shonen (there is always a strong, evil big brother in those). It has all the usual clichés of old mecha series (uniting mecha, classical voice activated robot attacks, alien invaders) backed up by a weird backdrop story that makes it really mysterious. Unfortunately it does very little with all that. SCRIPT: 3/10 - The series is a sequel to Haja Taisei Dangaiou, a very well made short OVA series of the 80’s that was left incomplete. Story continuity between them is otherwise really thin and could might as well not exist at all. In the story, evil scientists and aliens attack Earth (yet again!) and a mecha is made in Japan to stop them (yet again!). But things are not that simple. There is a secret human organization that wants to steal a very important secret from the heroes’ base and use it to dominate the world. And there is also a mysterious man, running around and aiding the heroes from the shadows. Adding to this a dramatic backdrop for all the main characters and you generally get a very good story for a mecha series. I even consider it to be a much simpler Neon Genesis Evagelion. - Although there are a dozen openings for side stories, the series is left linear. Most episodes are stand-alone missions, where the characters face some ecchi or dramatic situation before boarding their mecha and defeating some generic mecha-of-the-week in a few minutes.- The story is confusing as hell. Almost nothing is explained or reasoned. And the features that do get explained are more frustrating rather than convincing. This is rather expected in silly mecha shows but they went overboard in this one with the complicating mysteries. - There is no conclusion. No answers are given about the dozen mysteries and side stories the scenario involves leaving you with a huge question mark above your head. It almost feels like the series was canceled halfway, just like what happened with the original OVA. PRODUCTION VALUES: 7/10 - Compared to the first instalment, it feels very unimpressive. What you get is a generic alien civilization vs typical modern Japanese civilization set-up, with a few science fiction touches for flavor. There is nothing original or too well made here. Nothing awful but yet so generic and “one of the same” that you simply don’t feel interested in paying attention. - Facial grimaces on characters are great, especially during dementia scenes. The mecha designs are also eye-catchy, with lots of details and cool appearances. Some of them are really lame to look at without laughing but in general they are quite imposing, with lots of flashy powers. - Facial structure, clothes and battle costumes are terribly typical, reminiscent of almost every sci-fi series you can think of. - The mechas move very smoothly most of the time and cause really detailed explosions (debris and multiple flare bursts are present). Battle choreographies are otherwise quite pathetic as the battles are usually nothing more than a turn-based special attack sequence. - Voice Acting is ok; everyone talks in a very immature yet likeable way. The good guys don’t mumble only pathetic monologues about justice, love and compassion (as they do in classical shows) but also about personal drama, sexual innuendos and ironic remarks. The bad guys remain as one-dimensional megalomaniacs, as far as their talking is concerned.- Laser and explosion sound effects are cool, accompanied by blood-boiling music themes. The main song irritatingly repeats in all the episodes but never truly succeeds into becoming memorable. CAST: 3/10 - Totally generic and forgettable characters. The bad guys always die in one episode and the good guys that have a dramatic backdrop, are not developed properly, since there is no conclusion.- The good guys have a very vague backdrop story that makes sense if you manage to connect all the invisible dots. Something to do with being artificial? I am not sure and it was left hanging to dry. They try to pass as dramatic for that but the un-existing ending messes up everything. LEGACY Although confusing and incomplete, it is very enjoyable for mecha fans. The battles are epic, the ecchi is not bad, the villains are ridiculously generic to bother with and the weird flashbacks will make you wonder what just happened. It would be a lot better if it was not left incomplete. SUGGESTION LIST GravionDancougar NovaGekiganger 3 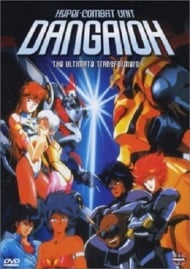