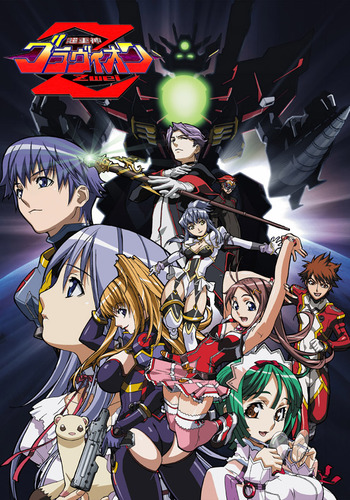 So if you've come here after watching the first part of this Anime, Gravion, then you Sir or Madam are either a big Anime fan, unknowingly purchased the DVD without seeing the first, or really like pain.  But you'll be rewarded (not really) by knowing this wasn't as bad as the first installment of the series.

This time around the Earth Federation Alliance has their own Gravion, and at times its even stronger than the original, so we don't have the complete repetitiveness of the first series when it comes to battles, though the terrible music and corny combining phase is still there.

Being that the EFA is a major part of the series we start to learn about their members and the connection they have to the original Gravion project, and how some of the Gravion pilots are connected to them.

The team deals with more real life issues in Zwei and there's a bigger emphasis on story and character building than in the first, maybe to make up for the complete lack of both.

They also still have the comical "out of the office" episode where they visits a hot spring, which brings some comedy and slice of life to the series, and provides for one of the better episodes of the complete 25 episode series.

Towards the end they really tie up those loose ends with Eiji's sister and the origin of Gravion.  If they combines the first two series they could have had a decent 14 or 15 episode series, where the first series took up 5 episodes and this one 9 or 10, and they might have had a 3+ star rating, but on its own Zwei isn't a terrible way of filling up a 4 hour television block on its own.

Again it was the same animation as the first, they did a good job with all the different monsters and the outer space sections, as well as the Gravion specialty, boobs and nudity, but the main focus of the show should be Gravion and the monsters.

Same as above, this pretty much mimicked the first so theres no real complaints.  Each voice was done well and never hit that nerve of wanting to shut it off for the bad dubs.  The music, again cheesy, but didn't distract from the story or animation.

Being this was the second part to the series the characters were somewhat built (who am I kidding they did nothing to build any of them in season one.) But this time around we got some decent back stories for the pilots and EFA crew, as well as Sandman and his brother.  The little twist and character growth that were lacking in the first installment were made up for with Zwei's focus on characters over battles.

While i think Zwei is a bit below average, I'm really teetering on the 4 to 5 rating.  Looking back I enjoyed it more than some Anime that may have gotten better ratings for animation or storyline.  Its not a chore to watch like the first Gravion and it wasn't bad for just passing the time.  I'd say if you can find a condensed version of the first series watch it and then follow it up with Zwei.