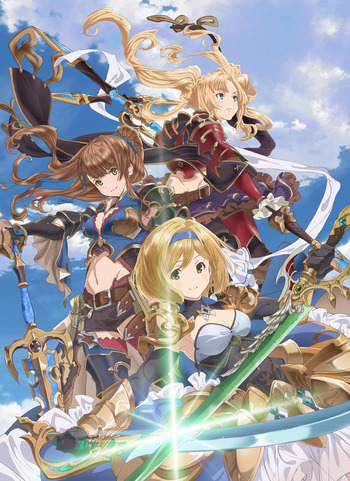 If you're looking for anime similar to Granblue Fantasy The Animation Season 2: Another Journey, you might like these titles.

On the Eastern Sea, there is an island with beautiful landscapes and abundant spiritual influence called Fuguang, or Floating Light. Three hundred years ago, a large crowd of evil spirits emerged on the island, and chaos ensued. To dispel them, the Cat God "Lan" cast spells under an ancient mountain tree. The islanders were so thankful that they built a shrine for the god underneath the tree. Since then, there has been a protective enchantment on the island, and monsters are rarely encountered. Certain cats have gained the opportunity to change into human form with cat ears and tails.

After battling their way through all seven Singularities, the Chaldea Security Organization has finally arrived at the endpoint of the Grand Order: The Final Singularity, Grand Temple of Time: Solomon. Now is the time to defeat the root of all evil, Solomon, the King of Mages. Now is the time to reclaim the future. With the final operation looming large, Romani Archaman considers the choices he will soon have to make, Mash Kyrielight dwells on life's limitations, and Fujimaru prepares to receive a new Mystic Code. All their many encounters have led to this moment as Fujimaru and Mash at last embark on their final operation...

The story is about a boy called Mangchi. He is small, but he possesses a magical hammer that helps him get around all his problems. He therefore got the nickname of "Hammerboy". Mangchi lives on a small distant island called Candlestick because everywhere else has turned into a wasteland because of some big catastrophe. When Princess Poplar from the kingdom of Jemius is being pursued by henchmen of the conspirator Moonk, Hammerboy sides with her, ready to unleash all his latent powers in order to save humankind.