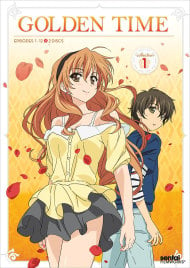 ***This is a spoiler free review*** Golden Time is an anime that really put me on a rollercoaster ride. There were moments where I legitimately thought it was the best drama I had seen in awhile when other times it had me wanting to drop the show entirely. Story: 7/10 I will say that the story for Golden Time is fresh, has twists and turns, and had very serious and emotional scenes. I will also say that there are a lot of "cheap" tricks the show uses to make certain events happen for convenient reasons. A quick rundown of the opening is that we follow new college student Tada Banri as he meets new friends Mitsuo, Chinami, Linda, and Kouko. The opening act of the anime had me extremely interested with the possibilities the show could span into. Banri automatically finds someone he likes, he becomes really close friends with Mitsuo, and there was many hints at future foreshadowing events. One thing I would like to point out is that the show did an incredible job at creating "real" feeling scenes that I will remember for the foreseeable future. The friendship between Banri and Mitsuo felt "real" and the events that occur between this cast felt very "real". Also later on in the show when s#!t gets real, I genuinely felt emotionally torn at what I was watching. Now I cannot comment on what I thought felt "cheap" about the show since it would ruin a major plot point but just know that while the show really pulls some things out of its a$$ in order to make sense of certain events, for the most part it ties the story together well enough in the end. I do not like rating certain arcs by themselves but the beginning of the show far outshines the ending act. Animation: 6.9/10 It was....basic but still looked pretty good. The animation studio used some really basic colors and there was a sense of dullness BUT they did an amazing job with facial expressions which really helped out in the emotional scenes. Character models looked pretty good (Kouko was so kawaii :D). Sound: 7/10 Music=pretty good Voice actors=amazing level Voice actors did a really awesome job while the music was good but not great. Openings and endings were not memorable. Characters: 9.5/10 Extremely tight nit cast that provided so many different scenes. One minute you are laughing at a funny scene while four minutes later you are flipping your chair into the air cursing out Kouko for being Kouko. Every character was important which is very important since a lot of anime try to stick generic stand in's for purpose made situations. Each character had a job and performed that job spectacularly. Now I won't lie and say that I loved each one of them. There were many and MANY moments when I really wanted to jumped into the show and beat the living fu#@ out of some of them but in the end I really did enjoy what each one brought to the table. Overall: 7.6/10 I really, really, really got involved with this anime. Some of the moments in this anime were the best I had experienced in a long time while others really made me want to leave it for awhile. It will grab your full and undivided attention with its witty cast and believable performances; just be prepared to really get frustrated. Enjoyment: 8.7/10 Thanks for reading my review! If you liked my writing style, would like to see some other reviews, or just want to talk, please stop by my page! Sincerely, Awesome Drummer

I finished watching Golden Time last night. And my reaction at the end was: meh. I don't know. I don't even know if I can write a review, because I'm not sure I can pinpoint exactly what didn't convince me.  Anyway, it's worth watching. But just barely. I have no issues with the animation or the music. I do object to the plot and the characters, though. Which are what make or break  an anime. While I was thinking what I should write in this review, I was trying to separate my judgement on the story and the characters from my reaction to them. Not easy. So, objectively, the story is ok. There are no major inconsistencies and you get an ending. And as for the characters, after 24 episodes you do get to care about them. Both major and minor ones. You never mistake one character for another, so that is a plus from the animation and drawing point of view, but also regarding the ability of the anime's creators to give each character a distinctive personality. The setting is college, not high school, so that's different. The protagonists are part of the festival club, where they practice Japanese folk dances which were really fun to watch and listen to. It should be a love triangle, but just by watching the opening and ending you have a pretty good idea as to which girl the protagonist ends up with in the end. No surprise there.  And this is the END OF THE SPOILER FREE PART of the review. Because to say what really annoyed me about this anime, I have to mention some details and plot developments that someone who still hasn't seen the anime may not want to know. Ok, so the first episodes introduce the characters. You have Tada Banri, laidback, predictable and reliable. And when his first day in college he befriends co-student Mitsuo, he finds himself caught in the middle of the stormy and crazy relationship between Mitsuo and his girlfriend Kouko, whom Banri also becomes friends with. At a certain point, Kouko gives up on Mitsuo and falls for Banri. And she kind of develops into a better person, or at least she seems to be a bit more able to restrain herself and her clinging stalker tendencies. All seems well, until you start to understand a little bit more about Banri's amnesia. After giving the matter some consideration, I agree with the other reviews that say that the amnesia was just an awkward and unnecessary plot device. While I was watching the episodes, I just kept thinking why the hell should there be two separate Banris, the pre and post-accident one, why must one necessarily exclude the other. I mean, the way that it's presented in the anime it's not even amnesia, more like schizophrenia. I really felt there was something lacking there. As the episodes progress, you see Banri struggling with himself, but I couldn't understand why he wasn't even a little bit curious about his former self, I couldn't grasp what exactly it was that he refused to accept when he didn't even consider making the effort to know about the life he was leading before the accident and the kind of person he was and the people he must have cared for and loved. Doesn't make sense. Regarding the characters, Kouko is undeniably the one you remember after the end of the anime. Even though I was rooting for Linda. And Banri is a kind of wishy-washy lead character. I mean, Kouko is deliberately presented as irritating because of all her flaws, so irritating that in the end it's endearing. Banri is just plain annoying in an absolutely negative way because of the lack of depth in the development of his character. Maybe what really ticked me off was the fact that, all considered, it wasn't even a love triangle as Banri is never presented as 1 person who is in love with 2 girls, but always as 2 different guys in love with 2 different girls; and these 2 guys just happen to share at times the same body. I mean, the conflict isn't about the girls, but the possession of the body. Can't help feeling that it's stupid. At the end, in the last episode, there is a sort of "reunion" of the two Banris, but to me it just felt like a half-hearted attempt to get rid of the pre-accident Banri in a quick way so that the post-accident Banri could get back together with Kouko. It didn't persuade me at all. And I'm definetely not going to re-watch it. 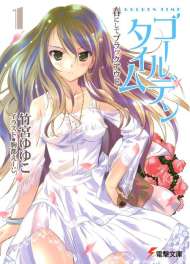 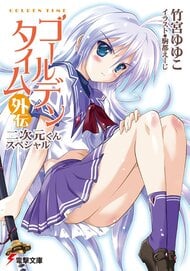 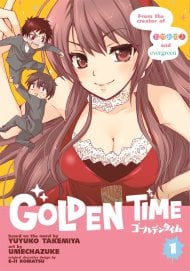