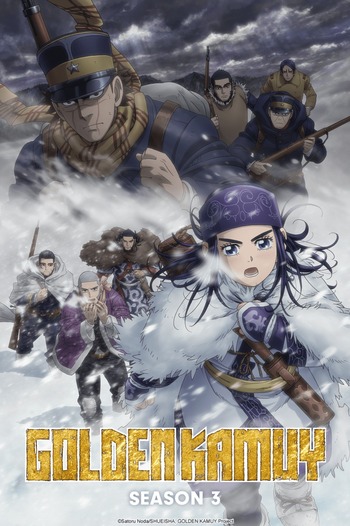 Golden Kamuy one of the most underrated shows out there, the new season amazed me once again can't say any word to it, it is just a great anime to watch, highly recommended.

Honestly, consistency and story-wise this is one of the best anime, simply great (I binged it in 4 hours)

Characters are amazing, development is consistent and on the point, mysteries are starting to become revealed and the world gets deeper and deeper. This as well as the other 2 seasons follows the manga brilliantly. Comedy is on the point, sometimes sudden or unexpecting but I loved it, it hits on many levels (watch and see), the drama is good, not overcomplicated so it's easy to watch and get involved. To sum the story of this season in one sentence I would say, "2 groups chase their goals in the cultured and historical areas of Japan and Russia while having fun indirectly". All characters have their own unique personalities which either had, have, or will have a deeper side throughout the story, all characters give a feel as they were set to, you hate who you were intended to hate , and you love who you were intended to love, but at the same time, you can relate to everyone (bad or good, trash or wholesome).

Like the other seasons, the CGI isn't the best but can be overlooked as everything else is amazing

The best season yet in terms of enjoyment for me. The comedy has always been great but the gags this season had me rolling on the floor. While in the previous seasons I was kind of bothered by the filler-ish arcs, this season they were so entertaining that they were 100% forgivable. The backstories and character arcs explored this season were also really nice, although I'm biased as it was some of my favorite characters like Koito and Tsukishima getting some screentime lol. Speaking of characters that get explored this season; why does ANYONE have Ogata as a comfort character this season cemented that that man is insane. Lots of hot hot men and Meiji era Japan fun facts as per usual. Can't wait for more so I'll probably read some more of the manga.