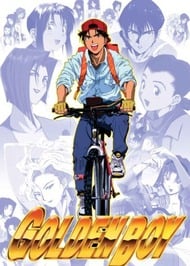 Story This OVA series is basically about the misadventures of the main character Kintaro and he goes from one job to another and gets involved in various ecchi situations.  This series is mostly episodic with a new job (and a new girl) in each episode (though the last episode does tie in with the previous episodes a little bit).  Now, I'm not a big fan of ecchi series but this is definately one of the better ones.  Most of the ecchi scenes are hilarious and this series just has a certain "heart" to it that many ecchi/fanservice series lack.  Each episode is a well paced self-contained story that has enough resolution at the end to be satisfying.  While the stories aren't real complex, they are entertaining for what they are. Animation The animation is actually pretty good for a mid-90's OVA. Sound The background music is pleasant, but forgettable. Characters  The main character, Kintaro, initially comes off as a perverted idiot.  While he is indeed a pervert, he's a likable pervert.  Also, while he does have his idiot moments, he also has several redeeming traits as well.  Not to mention that the various ecchi situations he gets in are hilarious.  As for each episode's main girl, they vary in likability (some are more likable than others).  They all seem to fall in some sort of trope or other.  However, they all do get at least some degree of character development, which is impressive considering they all get only one episode to shine (though the previous five girls do make a brief appearence in episode 6). Overall  As I said, this is one of the better ecchi anime I've seen.  Of course, if you absolutely hate ecchi with a passion then might want to avoid this series since there are plenty of boobs and panty shots (as well as some rather explict scenes in episode 5).  However, if you're like me (some one who isn't too fond of ecchi but is willing to give ecchi series a chance) then you may enjoy this series.  While there is plenty of fanservice, this OVA is also genuinely funny and has more going for it than just the fanservice.  And if you like ecchi, then you will definately enjoy this OVA.

ANIME MINOR JEWELS SERIES Full list of the review series can be found on this page, 3rd post from bottom: http://anidb.net/perl-bin/animedb.pl?uid=251338&show=userpage&do=blog&blogid=29009&page=0Golden Boy is a legend amongst retros. Not for its production values, or its complicating stories, or its amazing directing, or its mesmerizing soundtrack. All those are just average to good but nothing close to giving it an epic title. So basically all us veterans loved it in our younger years simply because the main character is a COMPLETE PERVERT! You think harem protagonists are boring only in few last years? Even as far as a decade ago we were fed up with those wastes of meat. And then we see what this guy is doing to a toilet and… LOL instant fondness! So we basically have Kintaro, a complete sleazeball who constantly runs from one job to another and does all sorts of things to impress the hot babes he meets there. And… that’s pretty much it really. Each episode is a stand alone case and down to its fundamentals the exact same thing happens. He is hired to do something, fails hard to it, the chicks starts to hate him, he does all sorts of deviant things, then he gets serious, does it right, and runs off while leaving them behind all horny and wet for him. You may be wondering why is this premise any better than the dozens of super ecchi shows we get today. Well, simply said the chicks here are all over him in just one episode and they “seem” to be willing to drop their pants for him the moment they find him. No goofing around with embarrassment and holding back for a thousand episodes. At the same time he, like the perfect male specimen, manages to win their attention, do his job right, and then run to the next chick after he is through with his current one. No sir, he does not stick to just one chick or one job. He doesn’t settle down and turns to another worker nobody. He is not content with what he has like an average man. He strives for forever more knowledge and experience around the world and for that he keeps going like a Duracel bunny. HE IS MY HERO!So yeah, if you try to see this from a more realistic point of view then this makes no sense. Why wouldn’t he settle down with a job he is good and a hot babe who is crazy about him? Why wouldn’t he have several nights of passion with them before running away to the next adventure? How does he even manage to live if he constantly travels with just a bike and no money? Sure, most of us would definitely not do that and just… settle down. But that is what makes him such a great guy after all; his love for the journey and not of the destination. He wants to be constantly on the move, constantly learning and doing different things, constantly dealing with different people, different jobs, different SEX FETISHES! He is the perfect Homo Universalis who wants to know and deal with everything! As for the erotic part, although the anime adaptation didn’t show any the manga version on the other hand does show how actually DOES occasionally have some jiggy-wiggy. So don’t make the mistake of considering him just another spineless virgin. KINTARO IS DA MAN!Apart from him though, all other characters and the story in overall don’t mean much. Being episodic and even formulaic has this problem and thus apart from Kintaro’s charisma and wild gimmicks everything else is left on a very basic level. We do see how most of the women feel and act but by the time some sort of development is about to happen, Kintaro runs away on his bike like the “hit and run” commando he is. Making up for that, the production values are quite good considering the time it was made. Being in OVA format allowed for higher budgets and far bolder humor than most tv series of the era would allow, thus it is great if you see it for what it is. It doesn’t have any sort of weird settings or artistic overtones; it is almost of an average erotic comedy/slice of life with more attention to shading and outlines. It is very good in overall if you are not 2013 quality whores. In all, it is a very enjoyable and memorable little series. Nothing that complicating or that different in the long run but it definitely offered A MAN in an era when spineless idiots were already starting to feel lame. Recommended. And if you like something similar, there is always Irresponsible Captain Tylor.And now for some excused scorings. ART SECTION: 7/10 Analysis: General Artwork 2/2, Character Figures 1/2, Backgrounds 1/2, Animation 1/2, Visual Effects 2/2 SOUND SECTION: 6/10 Analysis: Voice Acting 2/3, Music Themes 2/4, Sound Effects 2/3 STORY SECTION: 3/10 Analysis: Premise 1/2, Pacing 1/2, Complexity 1/2, Plausibility 0/2, Conclusion 0/2 CHARACTER SECTION: 6/10 Analysis: Presence 2/2, Personality 2/2, Backdrop 1/2, Development 1/2, Catharsis 0/2 VALUE SECTION: 6/10 Analysis: Historical Value 2/3, Rewatchability 1/3, Memorability 3/4 ENJOYMENT SECTION: 5/10 Analysis: Art 1/1, Sound 0/2, Story 1/3, Characters 3/4 VERDICT: 5.5/10