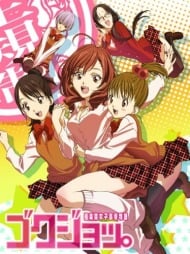 =Story 5/10= Gokujo has almost no story whatsoever. If this fact is bothersome to you, then turn away now, but if you are alright with it, go watch it--it'll take less than 90 minutes--and see whether or not you liked it; it will be well worth it. I know that I personally was happy with my decision to ignore the general misgivings many citizens of the internet seem to have with this show.  What little story Gokujo contains comes in the form of the introduction of the friends of the main character, Aya, throughout the first several episodes; then, towards the end of the series, Aya experiences a genuine rise and then resolution of emotional tension between her and her friend.  Story, however, is not the reason to watch this show.  =Animation 5/10= There was nothing particularly beautiful about this anime, but, frame by frame, it got the job done and didn't look horrifically ugly or anything doing it.  =Sound 5/10= The sound, also, was simultaneously unremarkable and unoffensive. I liked the opening theme song, it was simple and bouncy. =Characters 7/10= The characters in this series are flat and static, and all merely there to serve a comedic function. You have the alpha, the butt-monkey, the spiritual, the pervert, the princess, and the complete nobody. It is within their interactions that the merit of this show lies. =Overall 8/10= You may wonder why I've given this series an overall score of 8 despite none of the components of this review exceeding or even reaching that value, and the truth is that this is because I genuinely enjoyed watching this series, in more than a "6/10" kind of way. It had a certain je ne sais quois, a certain charm, that kept me in my seat, watching all 12 episodes back-to-back, until the series was over. It's not saying much, considering its running time, but as a matter of fact I will definitely watch it again, especially for the sake of showing it to my friends. This show is exploitative, campy, ridiculous, loud, vulgar, unabashed, and lewd. If it doesn't leave you bored with its transparently perverted antics, then it will certainly delight you with its bubbly and sheerly bizarre tone. It will make you say, "WHAT?!" and perhaps gently smack your forehead, because it's a bit like a train wreck--not in a "so bad it's good" way, but in a "so weird it's good" way! Sure, it's devoid of anything a critic might be looking for, but the sheer entertainment value in watching the interactions between these girls by far makes up for that fact.  Thus, 8/10. If you got this far in my review, give the show a shot. It'll help you kill an hour, and certainly make you laugh or at least open your mouth in incredulity XD Go watch Gokujo!

Since the show is short, I'll keep this review short. With episodes only five minutes long, you can't really fit in much plot or character development, or anything. Except fan-servce, which is the only thing this show has. If you like ecchi, and really crude humor, then you might get some laughs out of this show.

Greetings, fellow anime viewers. It's the ever opinionated RandomRedneck, here to dispense his wisdom, with another anime review. I'll be frank. This show sucks. Sucks HARD.Terrible characters, no story, poor animation, bad music...this is gonna be a fun review. This is Gokujo. Gokurakuin Joshikou Ryou Monogatari. Let us begin, shall we? STORY At 6 minutes, there is barely a story to be had. Typical episode plot goes as such. Aya does something stupid, causes hell for everyone else, roll credits. And features such well written gems as shoving ping-pong balls up peoples butts, one character sticking an electric toothbrush down her panties, and Aya shoving a garden hose in hers. Fun stuff huh? Moving on... ANIMATION Animation is standard, if a little on the cheap side. Said cheapness is visible at several points. Such as when Aya is being drug behind a motorcycle, and it looks like they slapped a cardboard cutout in the show. Like everything else, animation is terrible. SOUND Both the opening and ending theme suck...that's really all to deliver on the sound front. Frankly, it's a shame they managed to get some talented V.A.'s(Like Yoko Hikasa and Ayana Taketatsu of K-On! and Natsumi Takamori of Zero no Tsukaima) to voice this travesty. They do a passable job at least. CHARACTERS More accurately, character. There is only one character who needs to be discussed here. Aya Akabane. The cherry on the top of this crap sundae. A horrible character in EVERY respect. A personality as appealing as a constipated Wolverine...on fire, horribly dressed, not all that impressive in the looks department(Seriously, look at her during that last scene of the OP. Ugh.) and yet somehow, despite being a total harpy, EVERYONE wants to be friends with her. Despite her being a rude, abusing, panty thief.(Long story) Even when she loses her memory, and becomes likeable, her idiot friends try changing her back...oy. Aside from her, we have Typical Stoic, Typical Pervert, Typical Friends, and Typical Rich Girl. The only decent character is Aya's sister, and that's because she regularly abuses Aya when she shows up. OVERALL This show is an abomination. Thankfully, it seems to realize this, and compresses the awfulness into 6 minute episodes. Even then, there is nothing worth watching about this show. Avoid it like the plague. That is all. Thank you. Yours truly, RandomRedneck. 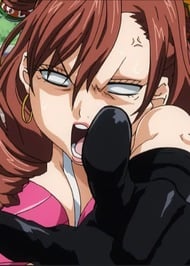 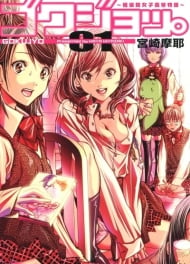