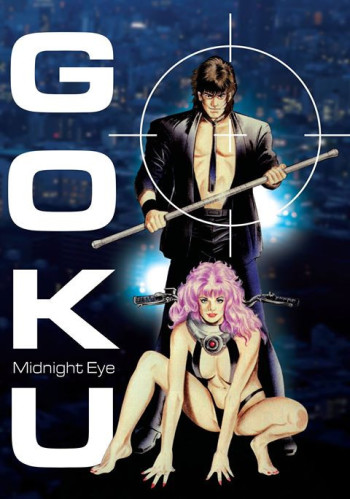 Art: Art is fine. It is a 'series' from 1989 and it looks like it. The style takes me back to my youth and the first anime that I watched and it still holds up.

Sound: No real complaints actually, it's pretty ok. Voice actors are good and I don't remember any music either, except that it is filled with 80's rock and you can't really go wrong there. This is how I generally prefer my anime.

Characters: The main character is Goku. He left the police department because he was dissattisfied with how things were done and became a private eye instead. He always follows his own moral code.

Story. There are 2 episodes of about 45 minutes and while I could explain it in detail it would spoil much of the plot of the episodes....such as there is a plot.

Rant. This anime was very hard to judge with a number as it was at once very bad but also very enjoyable to watch for all the crazy shit going on. If you ever want to have an anime that you can pop in to watch with friend while drunk or stoned than look no further.

Let me ask you this; where else can you watch a midget riding on the back of a naked female android that is decked out like a motercycle?

Story- Okay the story is pretty much this, Goku the main char, is a detective and people that he knows are commiting scuicide. He thinks that they are actually murders. He has an eye that can analyze things and makes him immune to the powers of the one who is making people commit scuicide. Apparantly it can also control technology but I don't really see much of that in this OVA So his lover Yoko, is fatally injured (or atleast put in a coma) due to the organization that the person who is making people commit scuicide is from(the leader used some bees that are attracted to human breathe)  So he wants get revenge on the organization and its leader. Oh and also he has a extendable metallic staff that shoots lightning. Sounds confusing? Thats because it is lol =P

Animation- idk I just love 80's style animation and character designs so this is mostly me being biased but I though the animation was great. The shading, lighting, colors the way the city looked and how they brought it to life. Just thought it was all great.

Sound- Umm... not the most amazing soundtrack ever but its not terrible, the OST fit the anime quite nicely and yeah Im a sucker for 80's music.

Characters- The characters of this anime consist of Goku the main char(he has a mullet and wears a blue tie and suit, and a blue leotard underneath), some random dude in a suit with a robtotic arm that gets killed at the start of the OVA, his partner and lover Yoko(or it might be Ryouko, I wasn't paying much attention, for most of the OVA she wears a red track suit and has black hair... kinda like that biker girl from Golden boy lol), a naked woman that hypnotizes you with peacock feather that grow from her ass, an naked android/cyborg woman who is partly a motorcycle and shoots lasers from her mouth (no seriously), a huge dude and the main bad guy... who also has a mullet. Theres no real development, but I gotta hand it to the original manga creator for coming up with somewhat orginial characters... I know goku is based off that Hindu myth and what not but the only thing that he takes from it is the staff and I mean an andorid bike woman that shoots lasers... never would have thought of that.

Overall- If you just want some mindless violence with a somewhat decent plot and some cool action scenes and characters, then give this a try, its not that bad. If your one of those people that can't stand violence and nudity and place all the importance on story and char development, this is not for you.

This was a surprinsingly good OVA. At first the title might seem weird and out of place but during the story everything about it will make sense in a very cool way. It is also original in way. The plot is very simple but well done. The pace keeps you interested. The animation per se is average but the art is very well done and everything looks pretty and stylish. During the fights the animation gets a little better though. The sound suits the story when it appears. The MC, for once, is a cool, likeable character. All in all this is a must see for everyone, I would totally recommend it.

This is a show about a former police officer now private detective who exclusively wears a suit jacket and pants, a super skinny tie, wrist bands, and no shirt on under the jacket. Every woman he meets is attracted to him. Obvi - did you not just read what he was wearing? Also - he gets a cyber-eye after being forced to removed his natural eye from his body after encountering a naked floating woman/peacock who controls minds. His cyber-eye provides communication and control with all technology around the world including instant access to every database about anything he thinks of and control over all the nuclear missles in the world. He also gets an apparently infinitely extending staff. Which I mean... that's a no brainer. In his line of work (never quite saving the girl and always coming in after everyone dies?) you gotta have an infinitely extending staff, DUH. This show is the perfect mixture of terrible and fun.

Just watch it. It's great as long as you take it for the pulp that it is.