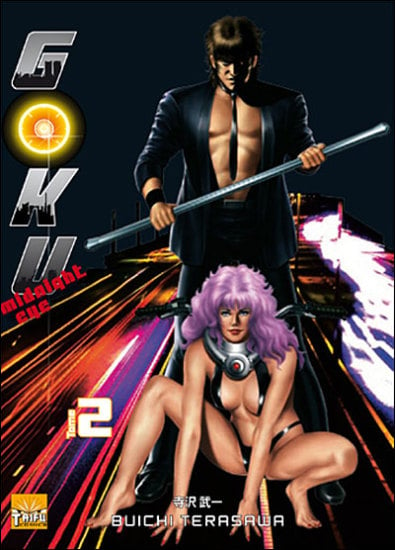 In the near future a new law in Japan is enacted, the "Shoot to kill" law. So called Triggers are selected, one in each prefecture. They are allowed to eradicate evil as they see fit.

Until Death Do Us Part

Haruka Tooyama is a twelve-year-old girl with incredible precognitive abilities. But her accuracy in predicting the future has made her a target for any number of greedy corporations that would use her power for their own profit. When she is kidnapped, Haruka uses her gift to seek out someone who can help her escape and fixes upon a blind man making his way through the busy streets of Tokyo. Though it may seem an odd choice, Haruka's powers have not led her wrong. Despite his inability to see, her chosen protector’s fighting skills become apparent when he draws a sword from his walking stick and deftly takes out her captors. Knowing she will always be pursued for her gift, Haruka begs the mystery swordsman to keep her safe... "Until Death Do Us Part".

Haruki is a teenage boy who has two friends that are not very ordinary. Ayana has been transformed to be part dog, as shown by her dog ears and tail. Ayana also has enormous lactating breasts. Airi, on the other hand, is a cyborg girl, and she's got tons of mechanical gadgets. The story begins when Ayana and Airi both want Haruki to join their club, and Haruki must pick one over the other. Ayana's science club has more to do with transforming living things, whereas Airi's has to do with more mechanical science. Their attempts to persuade Haruki to their side tend to be full of nudity and sexual arousal. Haruki is going to have a bizarre school life.