Godzilla Movie 2: City on the Edge of Battle - Reviews 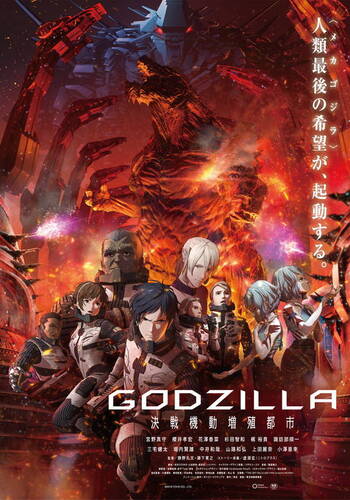 I started watching this Godzilla adaptation with the expectation of being highly disappointed. With the terrible reputation of Computer Graphics in anime and a franchise with so many previous adaptations so far, I thought I would enjoy it at all. But here I am, almost satisfied, after just finishing the second installment. This movie is definitely better than the first and it does make me look forward to watching the next as soon as I can.

The animation is a mixed experience because of the CG. Sometimes simple character movements like walking and hand gestures felt too robotic or unnatural (though this could be because my decade old, budget laptop couldn't handle the video playback). However, the fight scenes really stand out and I really enjoyed the Vulture scenes.

The story is pretty generic but it doesn't really bother me. The pacing and exposition felt good enough to make up for where the story lacks. The fight scenes were well choreographed. Sound effects were pretty decent but the soundtrack doesn't stand out at all.

If you're not a die hard fan of the franchise, Godzilla (1 and 2) is a good movie to watch on a casual off-day afternoon.

This CGI film trilogy certainly is not a version the famous kaiju deserved and this sequel to the first film despite having some promising ideas really did not improve in terms of character and plot development. Epic though it was, how it completely changed Godzilla from the creature fans know and adore was both odd and really confusing. Had it improved upon the errors prevalent in the first film, it would have been better and made the plot, setting and characters motivations more sensible. While the movie is watchable, it is not one to critically acclaim. I would much rather watch one of the many classic Godzilla films than this trilogy again.