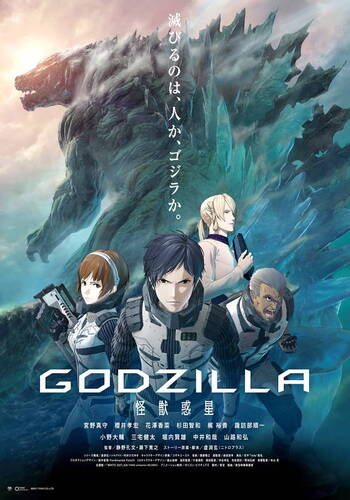 Fans of Godzilla often have to endure pain because of the wide range of quality in the Godzilla franchise. From great to fun to boring to miserable, how does Godzilla: Kaijuu Wakusei compare?

I enjoyed the idea of the movie: Godzilla is so powerful that he destroyed most of humanity. All survivors had to flee to space. Even with the help of aliens, Godzilla was too powerful. This sounds like a good idea because most Godzilla movies are too conservative about the destruction that Godzilla can bring to Earth. The problems with the story have to do with the characters and the plot. The characters are barely fleshed out, a common problem with Godzilla movies. The weak characters make the plot boring, as I did not care about character deaths. Godzilla has very little screen time, and the characters bring down a neat idea.

The movie is entirely CGI, and the CGI is disappointing. Most of the characters are fine, but many moments look strange. The directing is fine, and character perspectives are decent. The main problem is that Godzilla looks like he is made of plastic. Godzilla has looked silly in many movies, but he is not presented well here.

A neat story idea is wrecked by bland characters, ugly CGI and a boring pacing. Toho does not know how to make this movie interesting and fun, and the feeling I had was disappointment. I have no intention of watching the sequel, as this was a poor start to any new Godzilla anime.

I'm a huge Godzilla fan and so I was pretty stoked to see this as a thing, and yet, after watching it, I miss the old live action ones even more.

This fascination with CG styles, and Godzilla just looks ugly in this. The render of this amazing creature, not that great in this outing under the license.

I did like the design of vehicles, spaceships, their technology of which was a hodge podge of different species all trapped on a single mothership.

Although, I found it odd that they would wander the stars, when infact one of the lead officers of the strike force going to Earth mentions colonizing the moon and using the Earth as a funnel of resources. Why didnt they do that in the first place?

The last scene of this movie, though, it was good. It had all the right emotion and feel to it.