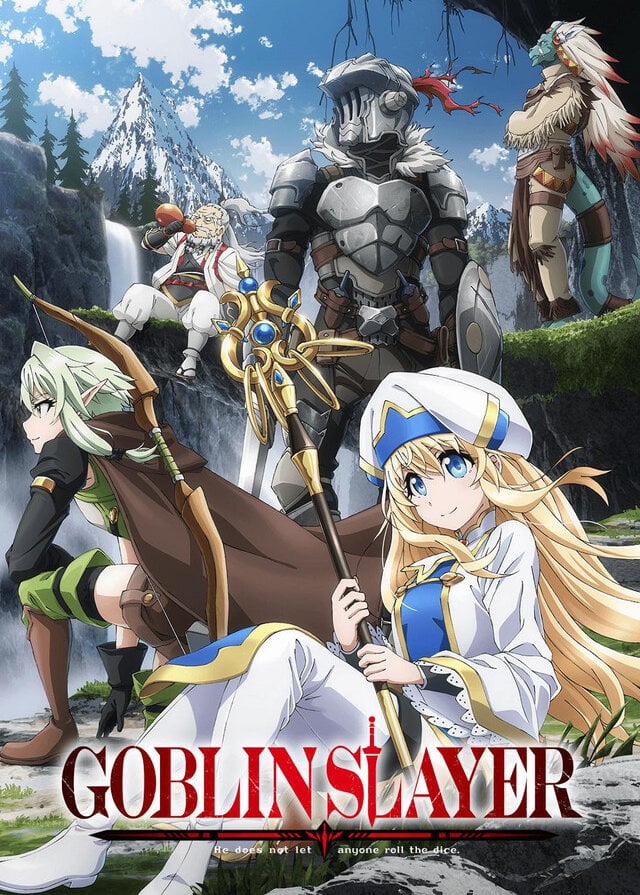 On the first day that the Priestess became an adventurer, she joins three other rookie adventurers on a quest to save some girls who were kidnapped by some goblins. Despite being one of the weakest monsters around, the rookie adventurers fall for some traps that were set for them in the goblin cave, which leads to dire results. A goblin was about to attack the Priestess when a mysterious armored figure appears before her. The armored figure then mercilessly starts slaughtering the goblins and tells the Priestess that his name is Goblin Slayer...

The Fate of Particular Adventurers

Goblin Slayer in the Water Town

Whispers and Prayers and Chants

There and Back Again

A Gathering of Adventurers

The Fate of an Adventurer

While very different tonally, both shows share a similar structure. A RPG inspired plot where characters go on quests to aquire gold and increase their skills in hopes of leveling up. Where the shows diverge is how they decide to depcict this adventure. Dungeon has elements of comedy, romance, not to mention a harem of girls for our bashful protagonist Bell. In Goblin Slayer there is much more focuse on the dangers of adventure and none of the naive expectations of fun. Goblin Slayer is much more graphic and realistic in its depiction of violence that naturally follows our characters. Be warned it is not for the queasy, especially the first episode which features sexual abuse. Dungeon is much more shonen and Goblin Slayer is more seinen to put it simply.

Both shows feature a protagonist without a family accompanied by a loli on thier dangerous journey. Both shows also introduce tertiary characters that join their party to alleviate some of the danger. An interesting aspect of Goblin Slayer that I found refreshing for the genre was that our eponymous protagonist is not the "Hero" of this world. There are other characters out there to defeat the big bad, he is simply the hero of his own story being told.

Goblin Slayer is a darker more mature anime than Is It Wrong to Try to Pick Up Girls in a Dungeon? however I think that most people will find it a refreshing change from the normal dungeon crawler anime.

Although their beginnings are different It's the same kind of main character and the worlds are very simmilar.

Both has similar background setting. Both also anime that is a bit (?) dark and bloody