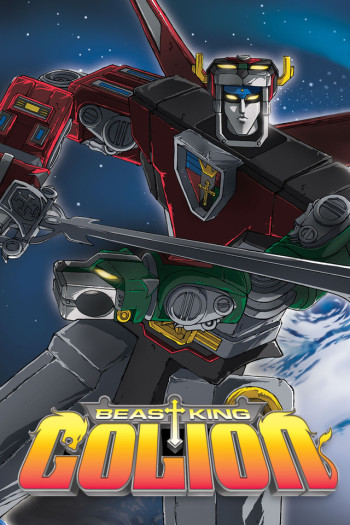 Voltron (Golion in Japan) is an old but quite famous mecha adventure. We can say that it’s the series that advertised the mecha genre in America and eventually to the rest of the world. It opened a path for the later more quality series such as Macross, Gundam, and Patlabor to cross with ease. That alone gives it a lot of historical value but beyond that, it’s just another mecha series with repetitive and predictable plot and with a filler episode ratio of 10 to 1. Rewatchability is very low especially if you are aware of who made it and what his older works were. Yatsude Saburo’s works involve one of the most cult mecha titles, Voltes V. In all honesty Voltron is practically a rehash with better visuals, in the same way Voltes V itself was an improved variation of Combattler V.

Anyways, the visuals were very good for their time, they are very crude by today’s standards. The leading mecha design looks silly in my eyes. The main motifs on it are five lions that combine into one, but their cool look gets easily worn off after the ten first times you see it. Why are they even seperated during non-battle time, other than eating up screen time ? Character figures, voice acting and sound effects are plain, special attacks are repetitive and all that matters is the finishing move. And stay away from the American version, by all means. It makes what is already bad, to sound even worse.

The American version watered down the violence a lot, so pay no attention to it. In general, alien “bad guys” attack a human planet and 5 “good guys” of Earth alliance find a powerful mecha and try to stop the invasion. That is the whole story. There is hardly any character development, as in the norm of all old series. There is a thin story continuity but with no interesting plot twists, especially if you have watched Voltes V. At least, there is a fair share of deaths amongst several important characters, making some really “drastic” character maturity.

All the major drawbacks of a childish story are present. A single mecha is able to beat an entire interstellar army. And the ingenious bad guys sent only one big monster at a time, instead of their entire army and end this story in half an episode. Don’t look for deep meanings in here; it is the usual heroic idealism at play here and all that mean very little if it’s just a rehash of an older work. If you have watched any decent mecha series or even a couple of Power Ranger seasons, this title will seem like something you would watch just to appreciate those blurry Gundam graphics you didn’t like at first.

Voltron is the surface of what GoLion has to offer. GoLion is violent, dark, and gritty, but still manages to keep qualities that make it funny and kid friendly (by Japanese standards). We see disturbing portrayals of torture and slavery in a very clear and direct presentation, and we truly see how difficult the war between Planet Altea and the Galra Empire truly is when we see the death of innocents. The pacing is typical of a mech and some other typical surface qualities that are present are of course some characterizations of the cast. Such as Princess Faala or Alura for awhile does suffer from a complex of whether or not she can live up to the expectations of the team after she becomes the blue lion pilot. which transitions to my next point of discussion. And to tell you something most of you may already know Sven, or Shirogane Takashi was not injured. He died at the hands of Honerva, the witch, who you may know as Haggar, and when he comes back in Voltron, it’s really his brother in the Japanese version, Ryou. It’s interesting to note that Takashi and Ryou also have very opposite personalities. Takashi was quieter and had leadership capabilities, while Ryou is more hotheaded and outspoken, and I felt that Voltron by making Ryou Sven really ruined that. And the ending will have some forced plot twists, which I found were somewhat anti-climatic and could have been used much better, but doesn’t really overall negate the quality of the anime.

But when you see GoLion in its original form no matter how many times you’ve seen Voltron, you truly feel like you’re watching it for the very first time and it will simply amaze you with what you could never see and never knew, and just makes the series really fresh.

While watching Voltron throughout my childhood, I was amazed by its concept of a space medieval world in an intergalactic war, but with a mystical mech. The only animes I’ve seen to do something in this nature are Escaflowne and Aura Battler Dunbine, though they are significantly different in their own ways as well in comparison to GoLion.

The violence is of course shocking to those familiar with Voltron, which we could never see. When they killed the Garla soldiers in Voltron, they just called some of them robots, while in fact they were organic beings in Go Lion. What’s also disturbing is that you’ll see massacres of women and children by getting chopped in half and other s**t like that. Not even Fist of the F**king North Star could get away with that in their anime.

But moving on, the design of GoLion is also still captivating to me with its simple but amazing articulation with the individual mechs, and how they can also form this humanoid giant robot. Of course we would see this concept again in Power Rangers or as they call it in Japan, tokusatsu. I know that the director Taguchi Katsuhiko was also a director for Go Ranger, the original tokusatsu which was a little over 10 years before GoLion. Granted it looks blocky when combined, I just thought its colorfulness and its face and how each robot had its own weapon when formed gave it a very unique personality and presence.

I am also fond of the style of the character design. It is of course typical 80s anime and after learning what anime is for the first time, when you go back to watching Voltron, you immediately recognize it as anime which people didn’t know until 10 years ago. The villains such as the Emperor Daibazaal or King Zarkon, were frightening and intimidating, and Prince Lotor or Prince Sincline’s design complimented his mixed heritage with not having wrinkly or scaly skin. So the character design is tolerable and very distinctive with its concept, and with awesome monster designs and fast paced battles.

Well, I’m sure we all remember the opening theme of Voltron, which used trumpets in a fan fare manner to give it some epic dignity, which I didn’t mind, but it was kind of repetitive in the use of the show, but GoLion shares this same flaw in relation to their music. With the Japanese version you got some Japanese disco and the lions when combining after a certain amount of episodes even have their own image songs, but I felt they over used the blue lion and the black lion songs way too much, and I think the other lions deserve as much time to have their own songs featured. And the opening theme sung by Mizuki Ichiro, offers a campy and fun nature but yet in true nature to the goals of GoLion and the team for the anime’s opening. And the ending theme is also pretty preachy about how we all come from different backgrounds, but hey, we all go down the same road.

The seiyuu cast consists of many great names. Inoue Kazuhiko, the voice of Kakashi from Naruto, plays Kogane, who you may remember as Keith. He sounds gruffy, but he’s convincing as both a teenager and as a commanding leader, and doesn’t have that laid back approach that he has with Kakashi. And both Takashi and Ryou Shirogane, is played by Nakao Ryuusei, who you may know as the voice of Freeza in DBZ, and I thought he brought Takashi’s quiet, but outspoken and opinionated nature to life, as well as the rash nature of Ryou. And another DB alumnus, Nozawa Masako, the voice of Gokuu, is the voice of Suzuishi (or Pidge), who I thought was appropriately chosen, and also does an excellent job as the voice of Honerva the witch, by sounding very evil and cunning. And Sincline is played by, Kamiya Akira, the voice of Kenshiro from Fist of the North Star, comes across as sadistic and crazy as well as charismatic. If I was to associate his portrayal with something along the mainstream, I’d say imagine the portrayal of Garlic, Jr. from DBZ, and you got Sincline. I personally think this is Kamiya’s best performance yet, and I always thought he did better playing villains. So the Japanese version also truly captures the characters in a performance that reflect its fun and dark nature.

Well, after watching GoLion, it is difficult to bring myself to take Voltron seriously. It’s just every time I watch Voltron, I laugh my head off over the changes and edits, and the stupid accents they gave Hys and Shirogane. It’s not out of outrage or spite, but because I now know this anime for what it really is and it’s just unbelievable what the edits are in a very comedic sense. Just like how in the old DBZ dub, they had this “Send you to the next dimension” bull s**t. As a matter of fact, I can’t call the product Voltron as anime anymore just like with Speed Racer. It was just taken from its original source material and became integrated to Americana culture, because Voltron is an icon in that respect as well as Speed Racer, and not as anime. And I can’t see them as anime icons. If you want to see them as icons of anime, see GoLion and Mach Go Go Go instead. To me, the difference between GoLion and Voltron is like picking between the red pill and the blue pill in the Matrix. And after watching GoLion, Voltron truly loses its novelty and value.

But I guess I feel if I never saw Voltron to begin with, I wouldn’t have found my way to Go Lion, not out of assumption of what it was going to really be like, but out of curiosity without knowing what to expect. The only thing I could guess were that the names were changed and probably so were some elements of the story, and Go Lion just answered my expectations just beyond my superficial ones. And if you really want to see this, please, just please by the DVDs. It’s very rare that great classics like this get licensed, while other s**t like harem gets licensed, but I say you check out Go Lion instead