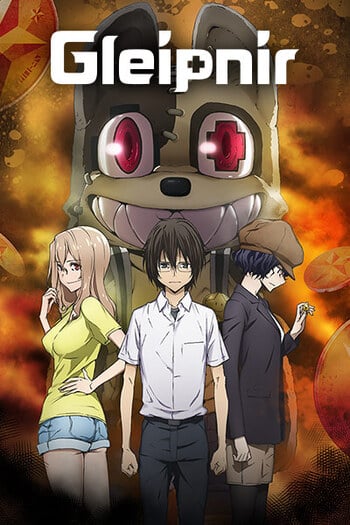 When I started with this anime, I didn't expect much. It was a side show for spring. But mainly interesting story suprised me. I would recommend this anime to Mirai Nikki fans. I personally liked it even more, but I guess many would disagree with that opinion. Concept of this anime is really intersting, colecting coins, gaining some powers by your personality or some important event of your life. Charectrs aren't really interesting for me (even tho Kaito seems interesting), but they powers are actually what makes characters different from other animes. Animation, sound are good but nothing that special. This anime is surely worth trying.

All I go to say , I have a mixed opinion of this anime , at some points it seemed really dull , and at some points it blew my mind over . It is somewhat weird , but in a good way , it gives off that mystery vibe , it is more to it than it lets , I look forward to the second season and I will surely read the manga , it piqued my interest , it gave us enough backstory for an only season . Very good anime , definently can't wait for the second season .

I liked the anime but 13 episodes were too little so the ending was dissatisfying as hell but the backstory behind the characters really made me intrigued (especially with what was revealed in ep 12) so I'm hoping to see a second season and am looking forward because the story does seem interesting.

The Anime-Planet Lottery Game is, as you know, relentless with the shit it decides to throw at people. So it’s just my shitty luck that I would end up with only the edgiest, ecchiest thing to come out this season. I wish saying the title alone was enough to give context and explanation for whatever the hell this show thinks is doing, but that’s obviously not going to work. I don’t even know what the title means, and I’ve seen all thirteen shitty episodes.

But the simple, lazy answer, I guess, is this: aliens.

The longer, more in-depth version of that is: aliens, who’ve crashed on Earth, lost their shit, and so, have commissioned a bunch of people to find their shit for them. And like any foreign employer looking to exploit the local talent, the alien rep offers – not cash – but wish fulfillment and other fringe benefits as payment for the outsourced workforce’s efforts. Your main character, duped into signing the contract because of a girl, finds that the fringe benefit he gets as his payment is the ability to turn into a dog mascot, along with an honest-to-goodness gun he can actually fire. Except that would be too straightforward a plot, so he gets the added kick of forgotten memories to make things more dramatic.

The show is every bit as edgy and ecchi as its wacko summary suggests, but its problem is that it takes all its shit so seriously. Because people are inherently horrible, a few of them team up, while too many of them kill each other to score more brownie points with the aliens. Because the main character turns into a literal dog mascot, he gets so irrationally depressed at how useless he is with his new form – even if, you know, he has a gun with him and everything. Because the girl who enters him is psychopathic and has a sister complex, she’s okay with using him until she starts developing feelings for him. And all the while, we’re treated to a series of unnecessary sex shots and innuendos, with every slithery, squicky, or slimy sound effect in the world to make things more… ah, entertaining, maybe.

All of which accidentally defeats the purpose of its shady backstory, which really is meatier stuff compared to the coin treasure hunt bullshit. As Gleipnir wants to indulge in all its repressed fantasies, watch it throw all that stuff out the window and never talk about it again, until it realizes the backstory’s actually needed for the finale.

Gleipnir is the gleeful pre-adolescent who has a fetish for spotting the lines and crossing them all, jumping and frolicking and reveling in his own edge, and tripping all the censors while he's at it. But then, like it’s afraid of being too immature, it tries to deliver a super serious spiel on the real nature of humanity. Between the lewd moments and the spineless main character’s useless ramblings, it’s a wonder why it gets so surprised that it isn’t being taken as seriously as it wants. Gleipnir wishes it were special. Dog mascot costume notwithstanding, it is, in the end, a classic case of a show that loses itself in its own side carnival. That’s why when things actually do start to happen, it’s difficult to know when it’s time to start giving a shit.

[This review was made for the Anime Lottery Game: Spring 2020 event. No, there’s nothing wrong with your TV – this is, in fact, the third straight edgy isekai shitshow I got in this game.]

Gleipnir belongs to the schlock action type of anime, and it’s not even doing a good job at being guilty pleasure. When the main attraction of the show is a beta loser school kid in a dumb looking mascot animal suit, you realize early on what you are getting yourself into. When the dream pixie girl of the show is a slut that is not missing the chance to do sleazy fan service, you also know how little the show cares about respect to its own characters. And when the fights are full of gore and nudity, you know there is not much depth in the themes. So yeah, it’s another one of those edgy nonsense shows for horny virgins who are still turned on by girls flashing their panties and who think violence equals maturity.

If for any reason you care about the plot, it’s about the beta loser helping the slut to fight others who can transform into monsters, by basically undressing and merging. Why are they fighting transforming superhumans? Because an alien wants to gather his lost coins and hands around superpowers to anyone who helps out. Does any of that make sense or even connect to each other properly? No, but then again you are not watching Gleipnir for the plot. It’s a mindless power fantasy about a loser virgin merging erotically with a naked slut and butchering to pieces a bunch of crazy people who are fighting over wish granting coins from space. And no, it’s not building up to something that has enough theme exploration for mitigating all the dumb parts. It doesn’t even end! They stop in the middle of nowhere, flip you the bird, and tell you to go read the manga.

And don’t expect to get much mindless entertainment either. The production values are mediocre, the characters are shallow, and there is nothing here you won’t find in other equally mindless yet also better animated anime such as Highschool of the Dead. Heck, even Gantz was better. Skip this one.