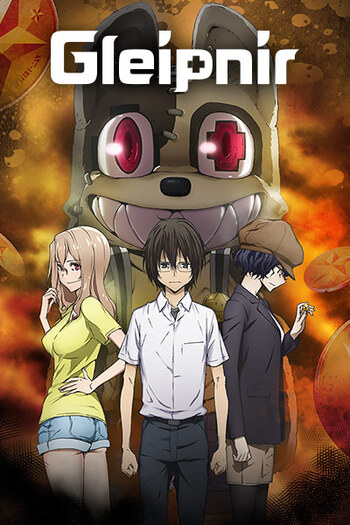 Characters recieve powers from a mysterious souce and are forced duke it out to gain riches and more powers. They characters try to unravel the mystery behind the outside forces while trying to survive.

Both are shows that have the so-called "edgy 12-year-old fight scenes". They have characters that are forced into a superpower, which forces them into a game which puts their lives at risk, and also forces them to kill others. The main characters are also followed around by a woman who is stronger then them, who also ends up controlling them. They also both have MCs who have to kill but don't want to, which ends up leaving their enemies confused on why they won't kill them on first glance.

Superpowered death battles are nothing new but, both have some terrifying mascot characters.

They're both about getting powers without really wishing for them and fighting others with powers. Both are really good so why wouldn't you watch them?

In both these shows characters are given mysterious powers by outside forces for mysterious reasons. The powers are all geared toward fighting and conflict which turns events into a bloodbath. Both shows feature boobs, butts and action.

-The main characters are very similar maybe a bit too similar

-Both have the same edgy vibe

While the Gleipnir anime hasn't concluded yet it is very similar to Btooom! Both series take a battle-royal approach and contain some of the same contents such as violence and sexual themes (not to a borderline H standard but still very close). Both are action-packed series with very sadistic and sometimes fragile (regarding traumas or mental state) characters. Sure, Gleipnir has a cast with powers and an overall different setting. But because of their similarities if you enjoyed one and wanted more or less a different style or circumstances then watch the other.

I can honestly say that these anime are very simmilar as we see a lot of charachter development throughout the anime. Another factor that convinces me that these anime are alike is the seriousness and gore of the anime and that they are no joke. Throughout both anime the main charachter are trying to survive, every episode in your mind your just like "how is he going to survive this time". In both anime we see the evolution of the main charachter from this wimp to a badass who can fight anyone, you can explain ity as a loss of innocence. Both anime also involve the abilities that were forced onto the main charachter and how they have to adapt to live with their new abilities. If you love parasyte you should definelty check out glepnir and vice versa.

Both these anime are about characters given power by aliens for mysterious purposes. In both anime the characters are forced to fight in deadly matches that feautre boobs, butts and action.

Both gain a wish. Lots of fighting. People who want to stop the fighting. Different plots but similar characters.

Set in the distant future, the land is ruined and humanity establishes the mobile fort city Plantation. Pilots produced inside Plantation live in Mistilteinn, also know as the "birdcage." Children live there knowing nothing of the outside world or the freedom of the sky. Their lives consist of battling to carry out missions. Their enemies are mysterious giant lifeforms known as Kyouryuu, and the children pilot robots called Franxx to face off against them. For the children, riding the Franxx proves their existence. A boy named Hiro is called Code:016, and he was once known as a prodigy. However, he has fallen behind, and his existence seems unnecessary. Not piloting a Franxx is the same as ceasing to exist. One day, a mysterious girl known as "Zero Two" appears before him. Two horns grow out of her head.

Gleipnir reminds me of Darling in the FRANXX because Clair Aoki is very similar to the Zero Two character. Both are very clever, popular and have fallen in love with similar characters. Hiro and Schuichi are very similar indeed. And in the end, the management of the combat robots and the costume only reinforced me in this view that these animes are similar.