Girls und Panzer: This is the Real Anzio Battle! - Reviews 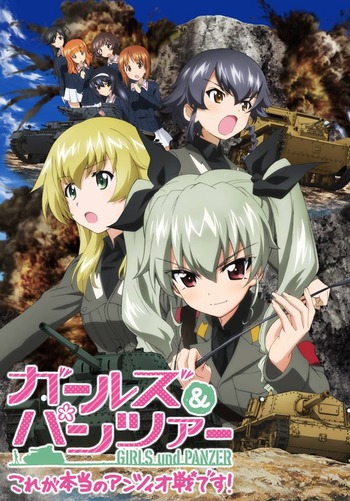 In episode 7 of Girls Und Panzer, Ouarai Academy was to go into quarter-final action against Anzio, an Italian-flavored girls academy with a strong tradition for sensha-do.  The whole episode was so taken up with girls' issues of the need for Ouarai to gain the championship, that it ended only with the notice that Ouarai beat Anzio in a hotly-contested match.  No tanks.  No maneuvers.  No strategy sessions.  Just the announcement.  Ouarai moves on, but who was this Anzio?

This OVA serves as the episode which fills in the details, running 13 minutes longer than a normal GUP episode.  This is a story of a classic battle between one school with strategy and a 'top-secret weapon’ versus the school that does its homework and works together not to be taken in by any unseemly tactics.   Because Anzio is ready to add a heavier tank to its fleet of light-weight ‘swift to the kill’ tankettes, it is necessary for Ouarai's top spy, Yukari, to infiltrate Anzio High and come back with her espionage-version of lifestyles of the ricco e famoso.  She discovers a high school rich in hospitality and passion for pasta.  This is depicted in the character of their vivacious leader Anchovy.   Abbondanza!

The battle is based on subterfuge.  Anzio wishes to lure Ouarai into an encirclement where the lighter Anzio tanks could blitz about and knock-out the heavier Ouarai tanks.  But an intense strategy meeting at Ouarai studies the weaknesses of the tankettes and the best way to disable them.  Miho is cautious about attacking too soon, suspicious of something so odd as an illegal eleventh tank.  But these were nothing more than cut-outs.  Miho quickly finds the best path to break out of the encirclement.

GUP Ep. 7 made it sound that the Ouarai-Anzio duel was a close match, but this OVA made Anzio commit a mistake which allowed several of its tanks to be wiped out.  This leads to a duel between the flag-tanks who work a stalemate until the first team can rush to the battle-field with reinforcements to eliminate the opponent's target-tank.  Due to clever Ouarai counter-strategy, I wonder who that was?

However, the story moved at an uneven pace, serving up the feign tactic too quickly, Ouarai's counter-attack sporadic, and the final showdown decided well before the final shot.  I thought that there would have been difficulty paring down the 37-minute piece to fit the 24-minute timeframe of the usual Girls Und Panzer episode.  This OVA more or less described the festive background of a school that would be a key player in GUP: Der Film.  But Anzio's sporty invitation to a party to celebrate a good battle ... a precious moment in seeing through the contentious nature of competitive sport as two friends Carpaccio of Anzio and Caesar of Ouarai exchange greetings.

A ugly gap in the storyline of the 12-episode season was filled rather nicely, all in keeping with the cheery spirit of sensha-do.