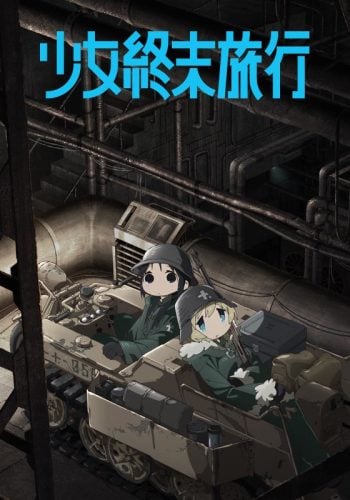 If you like a nice adventure through a different world with two lovable characters bantering over random things and talking to the interesting people that live in said unique world that the travelers must survive in, these two are great for that. They also both feature a motorbike, which is always nice.

If you liked watching one of these anime, I would say you will probaby like watching the other one as well.

Both are largely laid-back journeys, moving from place to place in a world that is generally bleaker than what most of us know. They include many ruminations on life and the world that cover various parts of a moral spectrum.

Traveling enlessly and lonely through through diverce essenarios while sorounded by a decadent high-tech world. They rarely encouter any person. Provides a very relaxing and couzy feeling.

They both show these little people you would think is it probably a comedy or just a little cute but bother show adventure struggle happiness sadness it shows a story so they both are good recommendations.

They have similar art style. The two main characters in both anime are drawn similarly in their cute, childlike chibiness. Despite the cuteness factor, both anime are about adventuring in a dark world where what lies ahead is unknown.

Kino and the talking motorrad, Hermes, travel the land together; visiting different countries and learning about the various customs and cultures of the people they encounter. From technological marvels to nations with unique laws and political intrigue, each location yields a wealth of insight of its people. The beautiful world they inhabit is a vast one, and a number of other travelers share tales of their adventures as well - an exiled prince wandering the land with his talking dog, an orphaned child raised by artificial intelligence, and a former slave girl with a talking motorrad of her own who photographs the world around her as she travels through it. Although the world is not always beautiful, its rich diversity lends it a fascinating loveliness that is worth the journey to see.

Both contain philosophical elements and two traveling companions journeying through a beautiful but dangerous world, observing and talking about it.

both shows are about lighthearted journeys, while they cover heavier themes like the everyone's individual purpose for living or the darker side of humankind. Whether it's the beutiful world, or the philosophy the show brings to question, both are sure to captivate and draw you in.

Very chill, has interesting world with unique creatures in it. Both very thoughtfully constructed. If you like one dash of subtle beauty you'll like the other.

While mushishi is not as cute as Girl's last tour. It is just as relaxing. I remember when I watched the show years back that I would put it on before bed and fall asleep to it. I found girl's last tour to be much the same. Here we have characters that simply travel around and live from day to day. I recomend it because if you want a good bedtime story here it is.

While Hakumei is cheerful, outgoing and prefers to be outside, Mikochi is more introverted and prefers to stay indoors. These differences will set the tone for their friendship. Riding on insects and birds, creating tools from the forest and living their normal lives, they'll show us how day to day chores can be the biggest adventure in a small world full of wonders.

Both anime are slow-paced and involved two girls living their life in their world, talking with each other. Nice, relaxing atmosphere in both.

the similarities are not limited to the chibi designs of the characters when it comes to those two shows, both of them are Slice of life Iyashikei shows about girls living in unusual setting.

Both shows are slice of life anime that attempt to deal with a more serious and mature subject matter, with Shoujo Shuumatsu being more focused on it's story and lore, while Gakkougurashi places emphasis on it's characters.

Both revolve around moe-looking characters trying to survive in a dying (or already dead) world... a slice of near death sort of shows.

In a desolate world filled with ruined buildings, giant mechanical bugs and a sea of poisonous red fog that blankets the land, a band of sisters travels from island to island. The girls are aided by the power of Kemurikusa, mysterious glowing leaves that their plant Midori produces, but the water they need to keep themselves and Midori alive is getting difficult to find. When they encounter a man who has lost his memory on their travels, they are suspicious of the fact that his body chemistry is nothing like their own; but their new companion is fascinated with Kemurikusa and ends up joining them on their quest for survival. What awaits them in this strange world?

girls on a road trip through post apocalyptic wasteland. both play on contrast between cutesy chara designs and melancholical setting.

Quite different in tone and story, but both have a duo traveling through an apocalyptic world, so if you like that sort of adventure/survival aspect you may enjoy the other.

Both anime about a duo group having adventure in a half-destroyed world.

Girls' last tour is two girls with a sad mood while sabikui is two boys with fighting element.

Journey through decaying world, meeting various people on the way, displaying how they fight against despair each their own way.

Despite the vast differences between their worlds and the events within, both of these anime are typically pretty relaxing and fun as we follow their young female leads. Girls' Last Tour is bleaker with more rumination on life, but either can be good for a bit of chill time.