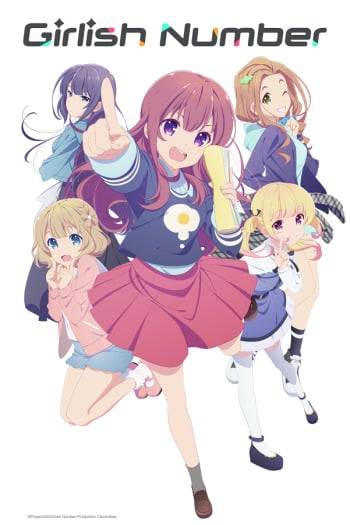 Both animes have a female protagonist who is trying to make a name for herself in showbiz, with acting in Skip Beat and voice acting in Girlish Number.

Both protagonists are very similar, and have bad tempers which they try to hide and a competitive side, causing lots of drama!

If you like one, you should definitely check out the other!

Both Shows deal with the ups and downs of the entertainment industry. Following the main cast as they deal with finding themselves and where they belong.

I am suprised that no one recommended Shirobako. Both anime focus on anime industry. Shirobako about anime production and well crafted anime. Girlish number focus mainly on voice acting

While they focus on a different field, both shows portrays what it takes to make an anime realistically but without getting too cynical (though Girlish Number is a bit harsh from time to time). They also share the same feeling and, even if I enjoyed Shirobako more than Girlish Number, fans of one will definitely like the other.

Both shows feature a rookie voice actress as she learns what it takes to be successful. The tone of each show is slightly different since Girlish Number portrays the subject in a realistic albeit slightly cynical way while REC adds some romance to lighten the mood.

Despite the differences between each show, fans of one will definitely enjoy the other.

This has a group of people collaborating on making a video game and has romance to replace action. It also has a similar story line and characters