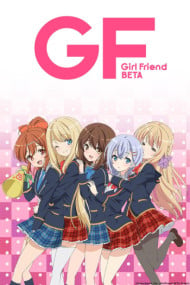 Well someone has to do the dirty work around here,heh? And that someone has to be me again, right? What can i say about Girlfriend BETA other than i don't know what to say..Or rather there is nothing to say cause this anime shouldn't exist in the first place. It's a waste of time, a waste of money, it's just a waste. To examine what went wrong with this clusterfuck of an anime i went to my favorite place. No not the strip club, i mean google, the all knowing search engine. And there i found many interesting things such as guides to suicide by pills or bleach and how painful each route is. Then i remembered that i had a review in the workings and immediately stopped clowning around and went to youface or whatever and found a large collection of music albums. This went on and on and on until i was bored eventually by all the free stuff and decided i needed a drink, so i went to my nearest mart and bought several bottles of gin. Then as i was slipping in my drunk hat i had an epiphany..I really wanted to look up recipes for weed cupcakes. Which is unfortunate cause i've lost all means of contact with my dealers so...I went to check what this piece of shit is all about. Turns out that GF BETA was a very popular smartphone game which for worse or for even worse got an anime adaptation....I know very well what goes through your mind right now..How could a smartphone game EVER get adapted to anime? And the answer to that my friends is memes..Yup memes. Didn't quite understand it my self but it seems that one of the girls is French and an idiot(well duh)and some other idiot picked up on it and turned it into a sensation. Well tide pods and people setting fire to themselves is a sensation these days, should we write an anime about them too? The game itself is a mobile dating sim and that's ok, people can do whatever they want with their lives, who am i to judge? Personally i would chop my gentleman's vegetables before i ever reached that point but whatever.. Anyway, whatever character development-i suspect-happens in the game then. That thing in the game might be ok and fine and dandy, but in the anime it works very much against it and that comes down to the vast amount of girls featured. It gets to the point where you can’t remember their names, what they do, who they're friends with and so on. And then is the story itself or rather the complete lack of story. It's cute girls doing silly cute shit all the way up to -11 of boredom scale. I've seen my fair share of SOL and i can tell you straight away that this anime is has them licked. And what with the characters being so bland and boring and with no story to back them up.......Better take a nap or indeed take many many pills and sleep eternally. Honestly i have seen elsewhere every frame of every scene 100000000000000000000000 times and that's far from my idea of entertaining. And even worse than that is because of the vast cast and the 12 eps run there is different shit happening all around the place with no actual flow to it. After litterally one ep of this and you will faint from blood loss from all the head scratching. Now if they had picked up at least 5 or so characters as the main focus and just let the rest of them lying around on the screen it would be better imo. But that's just hypothetical talk cause there is no main nothing here. K-On had much of nothing too but it had focus, it had a goal, a purpose, something to grab the attention of the viewer and most importantly it had animation...Which this doesn't. As with every other problem in this show the root of it is to be found in the cast. There were instances where there would be 12 girls on screen and the screen would be of course static..Care to imagine how many times that happened? Once, twice maybe? Don't bother there is no purpose in doing so. At least they took some time to refine the characteristics of the characters themselves. Kudos for trying there. So scenes infested with boring wide shots, quality that drops faster than the French airforce, generic characters, no story, no backbone and by the looks of things no boys..Yeah even though this is a co-ed school i only remember seeing 3 boys and they were doing nothing..Abso-fuckin-lutely nothing..Not even uttering a damn word. And this is based on a dating game..Or is it? You see this is also a rythm game, whatever that is..But there was no wide array of songs..Maybe 3 in total? Look i understand the appeal the game had because it featured the one thing the mindless teenager wants..High school girls with huge tits or even better lolis with open legs or something. This is no reason to take this game and turn it into an anime cause that supposedly would bring a rain of cash. I admire the effort cause admittedly bringing 100 or so characters to life is a bitch. But the effort alone means nothing to me if the anime itself is total crap. Anime is watced by millions of people for one thing...ENTERTAINMENT..And this has none of it in spades.

I watched this series due to the Anime Lotto Club.  Anyways, I decided to review it. Story This is essentually a slice of life/school life type series that follows the daily lives of various girls.  The episodes range from pretty cute to kind of boring (epecially if you are not into "cute girls doing cute things").  The series does have it's heartwarming moments, though.  In my opinion, episodes 3 and 11 are the best. Animation The animation is pretty much standard.  It isn't great, but it isn't bad either. Sound The opening song isn't anything special, but it does fit the series.  Same thing with the ending song (which is pleasant to listen to, but not particularly special).  The background music is forgetable. Characters The biggest flaw of this series (in my opinion, at least) is that it has too many characters.  It might not have been a problem if this was a 50+ episode series, but this is a 12 episode series.  There are not many 12 episode series that can get away with having this many characters (the only ones that pop off the top of my head are Baccanno! and, to a lesser extent, Angel Beats.  And even then, those series weren't slice of life and had epic plots to back them up).  Slice of life series rely on the characters and the audience bonding with the characters.  However, there are so many characters in Girl Friend BETA that it's hard to keep track of them all, much less bond with them.  Also, most of the characters don't get much (if any) development, though there are some that do (at least a little bit of development).  I will say that this series is at it's best (in my opinion) when it focuses on the main five girls (aka gymnist girl, library girl, French girl, anouncer girl, and camera girl).  If the show had focused primerally on these five girls, it would've been better (again, in my opinion).  Unfotunately, the show dedicates entire episodes to other groups of girls and makes it difficult to keep track of who's who.  If this was a longer (or more epic) series, then giving the limelight to otherwise secondary/minor characters wouldn't be a problem, but with as short as this series is, it just doesn't quite work. Overall This series isn't great, but it's not as terrible as some people make it out to be.  It would've been better if it didn't have as many characters and kept it's focus on the five girls I mentioned.  Still, if you like slice of life or "cute girls doing cute things", then you may find some enjoyment from this series.  That said, there are better slice of life anime out there.

In short, this anime is about school girls experiencing minor difficulties and different experiences (e.g. concerns of weight, studying, learning about Japanese culture) and how their friends help them. There is no romance or action, just positive relationships (mainly focused on friends, rather than family). It is not the kind of anime you could watch back-to-back because each episode works well as a stand-alone story. Furthermore, there is so much cuteness and positivity packed into each episode that it is quite difficult to watch two episodes in one sitting! If you were to watch an episode a day, I don't think you would find it 'boring' as other reviewers have claimed (or maybe this genre doesn't really appeal to them?). The title is quite misleading in terms of content, though it does seem to be based on a game of a similar name.  Don't be put off by the poor ratings if you do enjoy positive (and cute) slice-of-life stories! 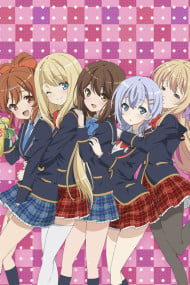