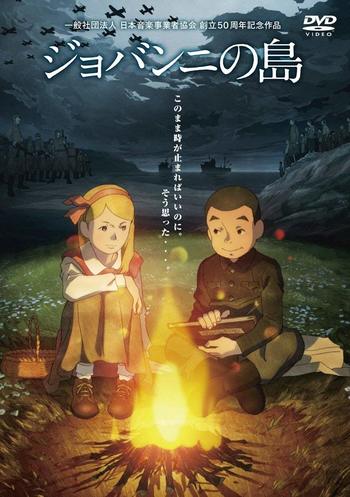 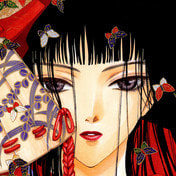 Both movies take place at the end of World War II (1945) and the story follows the struggle of two siblings in times of war.  The two stories can be very dramatic and depressing (especially Grave of the Fireflies), but they also have moments of happiness and hope. Both movies offer a different perspective of the aftermath, since the story in Grave of the Fireflies takes place in the city of Kobe and it begins with the firebombing of the city by the U.S.A. army, whereas the story in Giovanni’s Island takes place in the island of Shikotan, an island that in 1945 became part of the Soviet Union, but both movies are worth watching.

Both movies include sibblings and their struggle in WWII. Grave of Fireflies seems more darker, but both of them are very emotional, beautiful and touching. Sibblings loses their parents and tries to find a single glimpse of hope trough the hard times of war.

Both are war - related stories of the World War 2 era about siblings trying to find their father, that would bring you to the brink of tears

Did Grave of the Fireflies leave you with feels that you feel deeply? Do you want more of those feelings? Giovanni's Island is the film for you.

The artstyle is unconventional, but well animated, and the story, at least in my eyes, is harsher than GotF as the events take place after Japan surrenders in WWII.

The films have enough similarity in themes and settings that anyone who enjoys one, should enjoy the other.

Night on the Galactic Railroad

Giovanni is a young cat with a troubled childhood -- he is bullied in school, and waits patiently day after day for his father to return from his journey. One festive evening, Giovanni and his friend Camponella find themselves aboard a great train which takes them to the edge of the universe and back. However, in the midst of the sights and wonders, Giovanni soon begins to discover that the train's purpose might be much different than it appears.

Giovanni's Island borrows heavily from the nocel Night on the Galactic Railroad and uses the book as a narrative for the story. As the adaption of the novel is so good, you should probably check out the film.

And of course, if you've watched Night on the Galactic Railroad and enjoyed it, then you should definitely check out Giovanni's Island.

Less due to similar content, more due to the link between the two.

When Marnie Was There

When shy, artistic Anna moves to the seaside to live with her aunt and uncle, she stumbles upon an old mansion surrounded by marshes, and the mysterious young girl, Marnie, who lives there. The two girls instantly form a unique connection and friendship that blurs the lines between fantasy and reality. As the days go by, a nearly magnetic pull draws Anna back to the Marsh House again and again, and she begins to piece together the truth surrounding her strange new friend.

When Marnie was there and Giovanni's island are similar in some ways.

Giovanni had his brother Campanela, they both are like best friends, always doing things together. Imagining their journeys with a Galactic train

mean while Anna has a friend called Marnie. Even though  - SPOILER ALERT - she's imaginary or I should call it  a memmory of her grandmother when she was young.

Anyway - Anna and Marnie, Giovanni and Campanela have their adventure.

Marnie dies just like Campanela...  Sad story.. but nice one

In This Corner of the World

Based on the award-winning manga by Fumiyo Kouno, In This Corner Of The World tells the emotional story of Suzu, a young girl from Hiroshima, who's just become a bride in the nearby city of Kure during World War II. Living with her husband's family, Suzu has to adjust to her new life, which is made especially difficult by regular air raids. But life must go on, and Suzu — through the help of her new family and neighbors — begins to discover the joys of everyday life in Kure. Much is gained in Kure, but with war, many things cherished are also lost.

Both of these revolve around regular people who had their lives changed by the war and they both deal with loss while still giving hope for the future.

In the future after much of the world has been devastated by nuclear and biological warfare, a young scavenger or 'Junker' exploring a quarantined and abandoned city comes across a service robot still faithfully awaiting customers in the rooftop planetarium of a department store. Against his pragmatic instincts he helps the robot repair the planetarium's projector: a decision which will change both their fates.

Both anime include the MC that has gone through a rough life, loosing someone they care about, yet treasuring the dreams and precious memories of love until the very death. Great soundtracks, interesting story that includes war and dear moments of life.

Rail of the Star

Young Chiko and her family live in Japanese occupied Korea during the height of World War II, an area soon to be reoccupied by the Russians when Japan loses the war. For Chiko and many other Japanese people, this means exile from their homes, and the only way to escape is to head south towards their families and safe haven. Now, with unfriendly faces all around them, Chiko, her family, and a number of others must set off on a journey to find their way to safety through countless hardships, guided by the light of the stars...

On A Paper Crane: Tomoko's Adventure

One day, Tomoko Sato travels by herself to the Hiroshima Peace Memorial Museum for a class assignment, eager to complete her task. However, after learning the horrifying details of what took place many years ago, Tomoko leaves, finding herself in front of a beautiful statue that turns into a little girl! Named Sadako, the youth quickly becomes best friends with Tomoko, and shares her tragic story...

Two siblings rescue a stray kitten and hope that they can take care of little Kuro for ever. But the place they live in is Hiroshima and the year is 1945...