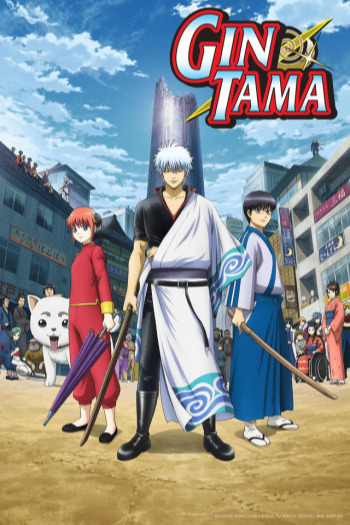 Well we can do this 2 ways.One is a short review where i can tell you how damn good this anime is and the other is me going on and on about what makes this a damn good anime and a must watch.

But then again how do you go the second path?How do you describe perfection?And how much will be lost in the translation?

That's why i won't bother going through everything with a fine comb.And i don't think there's a need to do so.Would you for example go into details about how great and awe inspiring is the Parthenon?It's something you feel,something that makes those chemicals in your brain go all nuts.

The only thing i will say is that this is the Gintama we all loved.Sure it's way more serious in tone,but then again there were so many moments i thought i'd die from oxygen deprivation from laughing.Gintama doesn't forget it's roots,what made it such a huge success worldwide.

And i bring that up cause i've seen people saying that this is not Gintama this not the parody,laugh to death anime we all knew..Really?Cause over the years Gintama had it's fair share of dead serious plots..So why is this an issue now?It's not like it's lost it's character..It's as sharp as ever despite the damn thing airing since the middle ages!It's evolved but the key elements are still there and still rocking with the best of them.

But then we all know all about this anime,about how we are being overwhelmed with emotion as soon as we set eyes upon it.Gintama in it's old age still carries a punch that can take out every single newcomer.It's dirty,it's funny,it's a feast for the eyes,it's politically incorrect,it takes you by the neck and smashes you into the wall.

As far as experiences go this is like no other and i don't think there will be another anime in our lifetime that will surpass it.

I am not ashamed to say that Gintama is my most favorite anime ever. It has the biggest and most unpredictable character set starting from masochistic shinobis to warrior with an older woman kink. This anime shows interactions between ALL the characters and that makes the story become more lively. Its also probably the funniest anime ever, although, the first 20 episodes are kind of lukewarm. But later on, this is certain to become the best show you have ever seen. Also this has the best protagonist ever, lazy and sleazy, thats Sakata Gintoki for you.

literally perfect,the arc sums up the whole story together in a perfect way and all the characters we've seen over the years were brought again and they all got their time to shine
in every episode there's action,drama,comedy and hearwarming moments that remind us why we love this show and why it's special,it's not about getting more and more stronger or having op power attacks it's about the good story telling and the beautiful relations between the characters and in the moment of crisis those relations are the key that saved edo

I already had huge doubts about the Rakuyou arc, but here they outdid themselves. Everything negative that Gintama could have ever done was present in just one season.

The plot comes to a head, the final season of Gintama was split into two halves. After these two, only the final movie comes and that's it, the story finds its end.

And yet, this season felt like half an eternity to me. 50% of the time the characters are just running and throwing meaningless dialogues around. The rest of the time extremely drawn-out fights with deadly slow pacing.
- This similar problem exists in One Piece, but here the slow pacing has practically surpassed Teo Animation.
In addition, the fights were monotonous, boring, and frankly not even meaningful, yet they took up the entire season.

After Utsuro finally revealed his plan and plunged Earth (or Japan, since the rest of the world doesn't exist in Gintama) into a state of chaos. Began an endless string of battles, against cannon fodder opponents that were just a waste of time.

Here you can see once again what the characters are once you remove most of their traits. Gintoki becomes an overdramatized philosopher. Kagura just looks angry and Shinpachi screams (well that he almost always did). And this is all you see of them.
Yes, there is a war going on. But the characters practically dissolve like sherbet as soon as the plot seems serious. Then they become immensely one-dimensional and flat.

Only Hasegawa and the new Shogun were convincing this season. Through their personality and development.

The intro is mostly average, the music can't convince like most of the other Gintama intros.

The outro was about on the same level.

The Osts have been enjoyable as always, but couldn't make up for the plummeting quality of this season. Also, most of the iconic posts were missing.

The animations have been quite barely average. The intro had been better animated than this season.

Add to that the deadly slow pacing and non-existent dynamics, the fights felt like they were empty.

It was necessary to watch this season, but it broke my heart. I already suspected this, but I had hoped that the anime would still maintain its quality. I still kind of liked this season, it's still Gintama after all.

But as for the quality, no just no.