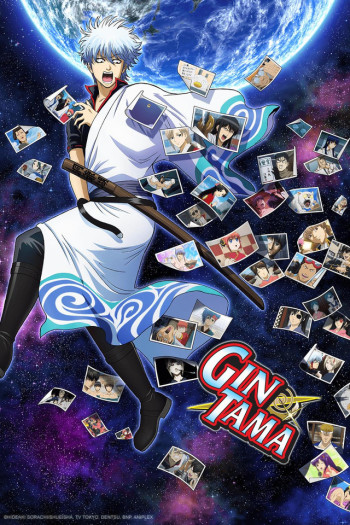 But Gintama has managed to do everything,it offers anything that anyone could want from an anime.Want comedy?That's there allright,want breath taking action scenes?Got some for ya good fellas.Want the dark,twisty turns and what have you?Got your six there mate.And you know the funny thing?Unlike so many other animes that try to be many things at once and fail miserably,this doesn't.This anime can be best described as a raging drunken bull that smashes his way through a city.It just barges in,kills everyone and heads to the next town to wreak havoc.

And honestly after so many years i didn't expect Gintama to reinvent the wheel or something.But then Porori-hen comes and proves me wrong.And as the series goes on i'll update my review accordingly but i don't think Gintama can do wrong.As it now stands 3 eps in,this anime still puts its' hands down my trousers and has a little rampage.Everything and i do mean every single thing about it is abso-fuckin-lutely amasing.And i can't for the life of me understand how they do that?Year after year after year.And it's not like Gintama has to prove itself.But it's still going strong and frankly i couldn't ask for more than that.

Haven't watched it yet?Well what are you waiting for then?

Questionable, but it's an undisputed fact for me. This season is the best of all Gintama, without exception. Not in terms of overall quality, but in terms of entertainment values.

But one wonders why? There are so many seasons and this season of all seasons is supposed to be the best? Well, the reasons are absurdly simple.

Gintama is a parody comedy with a relatively average plot, a lot of melodrama, great humor, and likable characters. And if you remove the "plot", all that remains is pure bizarre comedy as it should have been.

I can hardly put into words how much I enjoyed this wacky stupid season, without any drawn-out fights, slow pacing, and melodrama. This is Gintama, in its full bloom. Some other seasons achieved similar quality, but due to the constant fluctuations with the "Serious Arcs" and the lousy transitions, massive amounts of entertainment were lost.

Single humorous arcs without a real plot and with minimal narration.

The characters showed their best side here. You saw again, their egoistic and crazy personality and all their senseless conflicts. Whether it was to make money or simply to prevent the wedding between giants.

Average as ever. Gintama has never been known for excellent animation. For average presentation, these are more than enough.

[Music 7]
The usual familiar Easterns, without any great additions.
The intro from the Slip Arc is by far one of the most visually accurate for Gintama, which reflects the series well.
The outro is strange, musically relatively nice.

Since this season had nothing to do with the main storyline, it was a nice change of pace to see Gintama in all its glory once again.

I really loves this ending, all the girls are very cute. Im marrying  all of em.

A return to the perfect, random, comedy filled Gintama that I loved so much over the first 251 eps. There are lots of parodies and craziness, and if compared to the other seasons, it matches the 1st one the best in terms of what you get. After the terrible previous season that was one of the worst Anime I had ever watched, and a complete 180 of what made Gintama successful, I am very happy to say that they fixed their mistake and have once again delivered the perfect content that we all loved and made it so successful.

There are 4-ish arcs and a partial episode. All of them have very absurd themes, possibly more so than any in the past to the point that you would question the sanity of the writers, but this is what makes it so enjoyably entertaining. Without giving much away, there is a theme for every viewer and a hint at which characters you may expect: theres some action, story, character, music, and tons of comedy. At the end of it all, there is a preview with a claim of the last long Gintama arc coming (although this isn't the first time, or the second, or the third, that they say it's the last season)

A lot of the favorite characters get at least a bit of screen time which is neat. Considering there are only 13 eps for this season, each of those favorites got some screen time in a way that suits them. None of them got a ton of time like we are used which is unfortunate, but that's just a flaw with getting to know them over 300 eps, and 13 more eps just pales in comparison.

Overall it is an epic season. It's a true return to the older days for the all those fans who loved the episode (or short arc) based, nonsense themed comedy that just can't be found in any other Anime. Most of the scenarios defy any logic, and that is perfectly alright. No real form of story beyond the mini arcs spanning 2-4 eps makes it easy to enjoy these episodes and simply relax without focusing too hard in order to follow what's happening.

I am not ashamed to say that Gintama is my most favorite anime ever. It has the biggest and most unpredictable character set starting from masochistic shinobis to warrior with an older woman kink. This anime shows interactions between ALL the characters and that makes the story become more lively. Its also probably the funniest anime ever, although, the first 20 episodes are kind of lukewarm. But later on, this is certain to become the best show you have ever seen. Also this has the best protagonist ever, lazy and sleazy, thats Sakata Gintoki for you.

ALthough this season was a bit random put amongst two serious arcs, but I still loved it.