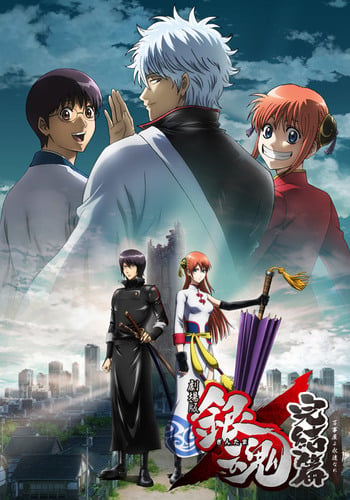 If you're looking for anime similar to Gintama Kanketsu-hen: Yorozuya yo Eien Nare, you might like these titles.

Master butt-swordsman Hiroshinosuke Nohara (Lone Wolf) travels with his family seeking employment. The family encounters a mysterious girl Hazumi and a wild dog Shiro, and decides to travel together. The group is attacked by various assassins, eventually their lives are threatened by the butt-swordsmen's enemy, the armpit-swordsmen of the Demon Bull Clan. Who will win: butts or armpits? Against an array of idiosyncratic enemies, Hiroshinosuke Nohara and his son Shinnosuke have the chance to display their swashbuckling skills.

A member of the Time Patrol finds out that there is a disturbance in Japan, 1570. While heading to that particular time and location to investigate, she is attacked and ends up stuck underground the Nohara residence in the end of the 20th century Japan. Having limited resources at hand, she is forced to ask for the help of the Nohara family. Together they go back in time and meet with a samurai named Fubuki-maru who believes that they are the legendary three persons and dog whom someone from her family would eventually meet in a crucial moment. The lonely samurai asks for their assistance in defeating the man that possesses strange magical powers, the sinister Unkokusai lord.

Told from the perspective of Misao Makimachi, this alternate retelling of the Kyoto arc chronicles the adventures of wandering swordsman Kenshin Himura and his quest in putting a stop to the evil Makoto Shishio and his plot to take over Japan.

Deadly giant bugs have begun to rampage through Edo Japan, and the Mushibugyou Protection Office must exterminate the threat. With the body count rising, the group requests aid from famed samurai Genjuurou Tsukishima, but due to an injury the man sends his inept-but-determined son Jinbei in his stead. Almost killed in his first encounter with the creatures, Jinbei is saved by his new colleagues of the Mushibugyou: fiery ninja Hibachi, violent warrior Koikawa, young onmyouji Ichinotani, and the enigmatic Mugai. Now, the group must learn to work together to overcome the many-legged menace!