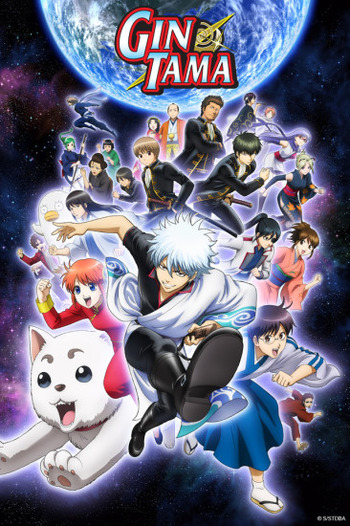 Gintoki and Takasugi continue their fierce battle, and the truth about their past, and the animosity between them, is finally revealed.

You Can Never Pause at the Perfect Time

Even a Matsui Stick Can't Handle Some Kinds of Dirt

An Inspector's Love Begins with an Inspection

Arriving Late to a Reunion Makes it Hard to Enter

When Compared to Time in the Heavens, Fifty Years of Human Life Resembles Naught but Dreams and Lottery Tickets

Guys With Big Nostrils Also Have Big Imaginations / You Never Accept a New Sentai Series at the Start, But By the Final Episode, You Don't Want It to End

At Cromartie High, it’s tough being a delinquent -- a fact that do-gooder Takashi Kamiyama intimately understands. When he’s not engaging in contests of strength and rival gang wars, Kamiyama can also be found submitting punny jokes and planning his own rise to fame within the delinquents’ ranks, and that’s just the beginning! With...

On first sight, Cromartie High School and Gintama do not seem to have much in common. Significantly different artstyle, different setting and different number of episodes. However, the main reason for this recommendation is the similarities in style of humor, (mostly) excluding the episodes with a more serious tone in Gintama. Both series heavily rely on humor based on impressions given by characters on conduct by other characters, resulting in random (or unexpected) events. This is further aided with the Amanto (or aliens) in Gintama and the silent (and "animorphic") characters in Cromartie High School.

Furthermore, both series heavily rely on knowledge of the Japanese language and culture to be fully understood and appreciated. If you are able to watch these series with developers commentary and/or interpretations of experts in hand, I would definitely recommend consulting these notes while watching the shows.

The only main caution in this recommendation is that the pace and consistence of jokes of both series signicantly differ. Where Gintama is a rollercoaster of genres, Cromartie High School almost exclusively sticks to Comedy.