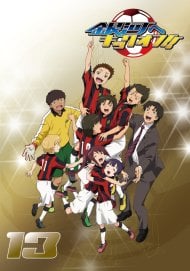 Story: The story of this anime is kinda shaky but interesting, its about these elementary kids wanting to become the best soccer team in the galaxy as their primary goal. The story is one of those classic sport anime when one team trying to be the best team around by beating the stronger team with some obstacles in the middle. I personally dont mind that stuff but the only thing unique with this is that the team started with only 1 player that year(the main character) but the team finished in the semi-finals the year before soo we know its not a crappy team who dont know what they're doing. Animation: The animation for the most part is alright the kids actually look like elementary kids and not teens or adultes. Good animation during the soccer games an overall well animated anime. Sound: Personally, i did not like the opening and ending i thought it was very annoying and usually i skip anyways but i think it should be mentioned that its very annoying. Voice acting not bad they sound like elementary kids and the adultes sound like adultes no weird voices or anythning pretty basic. Characters: For the characters, there's no real developpement, soo far they dont have a personality change or anything i dont think they intend to change it its not that type of anime the only thing they do have is they are all good at something. The main character, Shou, is not good at soccer AT ALL he's really bad the only thing that makes him captain and the core of the team is his eyes if you wwatch it youll understand i dont want to spoil big things. He will get better through the course of the anime but i dont really like it when the main character is not good at what he does. Overall: Overall this anime is just a anime if your a sport fan and dont knnow any other good ones to watch youll enjoy yourself just not getting any exitement or something like that its a decent watch. 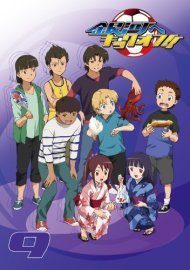