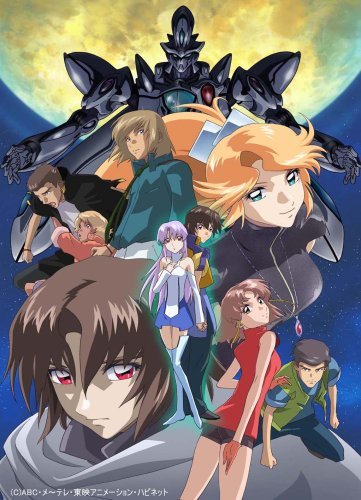 Presentation is half the fun of everything. If your teacher is an interesting guy to keep watching, even math can be a nice time at school. And this is the main problem with this show; it lacks presentation. The core story is actually quite good but it was shown in such an amateurish way you end up not caring about it. It is a mix of various post-apocalyptic stories we have seen over the years, all of which are interesting topics to make a story from. Unfortunately, nothing was done in a way for you to chose any other show implementing the same idea to this. Everything is plain BORING! And since I love making lists of reasons, here is another one.

1) Hey, the characters remind me of Gundam SEED! It is a famous show and it is still liked by many people and the same character designer made the Olynssis cast as well. That would in theory mean you can find equally interesting characters here as well, but no, they are not. They are dried up caricatures made on the run, with far less quality both in personality and even artwork and animation.

2) Hey, the heroes’ team is so much like Gundam X! True, the team is strolling the countryside of a devastated planet, scavenging the remains of a former advanced human civilization and helping the local populations deal with roaming machines. Unfortunately, none of the cast has the same depth as in that other show.

3) Hey, the enemy robots have a similar role to those bugs in Blue Gender! Yes, the mechanic Gardeners are, just like the Blue, aiming to eradicate humanity for ecological reasons. They are otherwise far less interesting as adversaries because when they are defeated, they just go boom and disappear. The Blue on the other hand would scream, blow in little pieces and fill the surrounding area with their guts and blood. Also, while they both kill people on sight, we almost never see corpses with the Gardeners. But the Blue, man, they would create lumps of grotesque meat out of their victims.

But even if you don’t try to compare it with other shows, the anime is still bad in terms of interesting storytelling.

1) The amnesia routine. A key character will have forgotten her past and thus a mystery that would have been revealed in 10 minutes, now took 10 episodes, which is most of the show. Plain and simple, the amnesia routine was used just to maintain a mystery. And it would be fine if the girl had complete amnesia but no, she only forgets what the plot requires her to forget. She still has the hots for the same guy and she even remembers his name. How convenient is that?

2) Parents are not there. Everybody feels like they sprout from the ground. Not only we don’t see parents, but they are also never mentioned. I mean, even if they are dead they should still be mentioned at least once as means to show how they affected their kids or how they came to be living together or WHATEVER! Yet for all we see, the series begins with these teenagers having their own mobile base and super vehicles and no real mention who took care of them or how they got to acquire all that fancy stuff. That makes everything feel without a base to start from.

3) Everybody is short-sighted. You won’t believe how many times heroes and enemies won’t be able to see something huge right next to them. Famous examples include last-moment saves by an incoming huge mecha blocking an attack that would kill someone. Said mecha, was not in the battlefield up until seconds ago and no matter how fast it is, it sure doesn’t move faster than the light. Another example, is the heroes mentioning to a woman how they intend to go to a city near by. So she point in the area next to them where a huge amount of smoke is coming from the now destroyed city. Were they blind to be unable to see a valley-long city that filled half the sky with black smoke that can be seen from hundreds of miles away? How about everybody looking surprised to learn some of them are not humans but artificially created beings? Wow, wasn’t the cross-shaped iris in their eyes a give-away hint that something is off with them from the first second they met them?

4) Retarded dialogues and romance. The lead male is the archetypical spineless harem lead and guess what, all the chicks love him and not the muscular, more active, more open and sure of themselves fighters right next to him. Harem premise anyone? Even half the things they are saying are dried up one-liners you usually find in date-sims. “This is my Koichi, Koichi is so good to Tia, Koichi better go on date with me to find courage”. I was almost expecting for a text box with options to appear, where I could choose my Kama Sutra position with every girl I meet.

5) Huge plot holes and story inconsistency. The writers of the show hardly bothered to make the story feel logical or even consistent. For example, when the lead character glances at the lead mecha for the first time in the pilot episode, he will comment surprised “I know this robot from somewhere.” So here you think it is another mystery to be explained later but NO IT ISN’T! He never saw it before in his life, it had nothing to do with the story, or him having amnesia either. It was plain bad storytelling. At another point we are told how Earth is being attacked by Gardeners for over a thousand years and how the entire planet is isolated from the rest of the space with an energy field that prevents humans from other planets to enter it. So here I am asking you, how is it humanely possible for this war to last for so many years when the robots destroy cities at a daily base? Even if humans would breed like rabbits, they would still be eradicated in a few years. But that is not possible because there are no parents in this show, remember? And what the hell, every mysterious girl appears after a thousand years at the same moment mankind begins its last attack on the machines? And what the hell, was Tia in a coma all this time? Or was the space fleet waiting outside of the planet stationary for all this time? Thousand years my but; all that make sense only if they lasted a few years at best.

6) Time travel panacea. A character comes from the future in order to change the bad ending of the original timeline. Well thank you so much for the forced good ending you idiots! As if the story wasn’t bad as it is, you now had to shoehorn a character who knows everything that will happen and can easily change it. And what a surprise, not even that character bothered to explain the plan before the finale just to throw in more stupid mystery. Not only that but she hardly explained HOW she traveled in time or HOW she found Swartch in the first place. More plot holes.

7) Ridiculous attempts at making the story feel sophisticated. There are many scenes which try to make you think the characters are smart which end up making you facepalm. There is a scene where robots constantly attack a city and nobody knows the reason but suddenly one will scream out of nowhere “I got it, it all started when that girl came to town. You know, the ONLY person who EVEN came to our town all these months?” Well done Sherlock! There is another scene where a girl informs that one of their team is missing from her room. Everybody goes there to see and true, she is not there. Well, the other girl just said she wasn’t so why did 6 people go to double check the obvious? Not only that, but one of them touches the bed and says “It is still warm so she didn’t leave too long ago.” ARE YOU FRAKKING KIDDING ME??? It took several minutes between the moment the girl found out she was missing and informed the others, up to the moment the guy touched the bed. Any bed that follows the laws of thermodynamics would have long lost its stored heat by then.

I can also throw in how TERRIBLE the production values are. Artwork and animation are way too crude, with big character outlines, awfully simplistic explosions and jerky motions. And what is this, why are all the girls running around with extra short skirts? I doubt it has something to do with the fashion of that time; it’s plain fan service that undermines women and turns them to fap material. And the lead mechas look bad as well. Mechas are supposed to look cool and these are not.

The only thing I really liked in the show is the opening and ending themes, which are indeed good and which I feel they were wasted on this show.
http://www.youtube.com/watch?v=yHLa-JeDnho

Bottom line? Not recommended unless you want to drop your IQ.