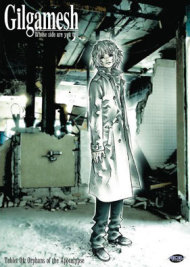 Two siblings, Kiyoko and Tatsuya, live in a future reshaped by a terrorist attack known only as "Twin X". In this terrible new world, advanced technology such as computers and radios no longer function and even the very sky has become something terrifyingly alien. With the siblings' mother dead, they are hunted by loan sharks who want recompense for her debt as well as a mysterious Countess who wants them for her own reasons. Even worse, they are also coveted by their father, the terrorist who caused the "Twin X", Gilgamesh!

I will sound like a broken record but this anime is yet another good idea with a bad presentation. It tries to do things differently in a tired premise but only ends up making things worse than it already is. What is the premise? Some kids with superpowers are divided into two groups. One doesn’t like the world and wants to purify it, the other likes it and fights to leave it as it is. And if that doesn’t give you vibes from a dozen other anime such as Neon Genesis or X-tv, then you are a total newb. So yes, the main objective of the anime is damn generic yet the way it unfolds not so much. You see, the characters are not the usual good hearted shounen heroes and the mistreated/misguided evil ones. They are all pretty much this bunch of cynical, amoral bunch of uncaring youths, with little concern about what the world is going through. At this point we have an interesting twist to the formula, as this way the characters seem to behave more realistic. Not everything is about the fate of the world and not every day should be hard training and guts so to become THE BEST SOMETHING-SOMETHING IN THE WORLD!!! So it pretty much centers on what each character feels and believes about the world in a very apathetic way.… Which is also what makes the cast really hard to like. If the characters don’t care much, why would the viewer do? In any show the main characters are supposed to make you sympathize with them, cheer or boo them, make you part of their struggle and efforts. Well not in this case, since everybody doesn’t give a rat’s ass; meaning if they affect you, you will also not give a rat’s ass about them. And anyway, how can people fight for the fate of the world if they are not highly motivated and idealistic to begin with? It’s as if they take sides at random and fight just because they are bored or have nothing better to do. Effectively the viewer is given a series where he is supposed to tolerate uncaring people just because they are supposed to be more realistic this way. Well they ain’t and on top of that they are boring and even hateful. And it’s not like a story about apathy or boredom can’t possibly be good. I am no fan of Suzumiya Haruhi, yet its simplistic stereotypical characters were a hundred times more likable and worthy to follow through, just because they were MOTIVATING you. It was all like “I am bored so I am doing crazy stuff to fill my life with excitement.” Sure, it can work; especially if this comes from the mouth of a perky moe girl. What motivation is given by this bunch of bored people? Absolutely none. In fact, the show gets finished and you are still left blanked out to why they chose their side to begin with. The problem with this show doesn’t stop to the cast; the action part is also dull. There is very little choreography, lots of still images, random people appearing and disappearing, teleporting exactly where the scriptwriter wants and dying when their purpose is over. The visual effects are poor, there is way too much darkness to tell what is going on half the time, and in general I was yawning half the times, waiting for this sleeping pill to end. Don’t make the mistake of expecting good action in this, just because everybody has superpowers. You will hate it right away. And it’s not just the action; the animation of the whole show simply feels poor. The characters are mostly standing still or teleporting with superpowers or something, while the 3D monsters move in a crude way and feel totally fake. I guess the goth artwork, the soundtrack, and the lighting effects were done in a great way since everything is mostly dark and gloomy, just like what you are supposed to be feeling about the whole thing. What a lovely way to begin your day…And it ain’t just the animation only; the whole plot is slow and mostly uneventful. It is made up mostly of dull sounding dialogues, people standing still and looking all emo, and the whole area being depressing. As it usually happens with poorly written series, towards the end the plot goes on turbo mode and people start dying just because it is the last episode. Yeah, cheap last impressions about a story that never motivates you to care and ends with barely explaining itself. The actual story is not bad as a storyboard; there are lots of twists that look great on paper yet look shit when presented in such a dull or rushed way. People are cloned, siblings go incestuous, the world ends, and I am not made to care. Thanks but you fail. I will end as I began. Good idea but bad presentation. Thus nothing new to see here.And now for some excused scorings. ART SECTION: 7/10 Analysis: General Artwork 2/2, Character Figures 1/2, Backgrounds 1/2, Animation 1/2, Visual Effects 2/2 SOUND SECTION: 7/10 Analysis: Voice Acting 2/3, Music Themes 2/4, Sound Effects 3/3 STORY SECTION: 3/10 Analysis: Premise 2/2, Pacing 0/2, Complexity 1/2, Plausibility 0/2, Conclusion 0/2 CHARACTER SECTION: 3/10 Analysis: Presence 0/2, Personality 2/2, Backdrop 1/2, Development 0/2, Catharsis 0/2 VALUE SECTION: 2/10 Analysis: Historical Value 0/3, Rewatchability 0/3, Memorability 2/4 ENJOYMENT SECTION: 1/10 Analysis: Art 0/1, Sound 0/2, Story 1/3, Characters 0/4 VERDICT: 4/10

Anime in 200 Words: Gilgamesh Premise: An international scientific research facility is created, and one of the projects that they develop is used to transform the sky into a mirror. Now, a few years later, two children get dragged into the war between espers and warriors called Gilgamesh.Psychological Twists: It’s really hard to tell who the “good guys” and the “bad guys” are in Gilgamesh. You would think that it’s obvious, if you only look at character designs, but eventually, things get pretty blurred. Is the Countess trying to help people or just herself? What about the Professor? The confusion works well with the mirror imagery and the gray-based color scheme. It’s almost poetic.           Powers: There’s nothing really special about the espers except for that addiction thing. Always gave me an awkward feeling, but hey, at least it’s different, right? The members of Gilgamesh have different powers than I thought they would, but it was nice to see the complications involved in serious injuries for them. That may sound unrelated, but I’m trying not to ruin anything.           Overall: Intrigue-based shows aren’t my favorite, which lowers my rating a bit, but Gilgamesh is a decent show. Take it or leave it.

Second time watching after I decided to pick up the box set. After finishing it again after such along time I remembered why I loved this anime. It is very unique where few if any other animes come close to it. The animation is no the best but the style is extremely good and unfortunately hardly ever used. The story does start off rather slow but it ends up being amazing and rather complex once you start to think things over or just connect dots as you go through it. Personally I liked all of the characters and all their personalities. I feel that this anime has received such low reviews due to people not really getting into or just not finishing it after losing interest early on.+Unique Art+Rather deep story+unique as a whole-Fight scenes could be better-Story starts off slow Give it a chance and I think you will like it ^_^ 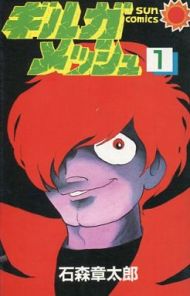