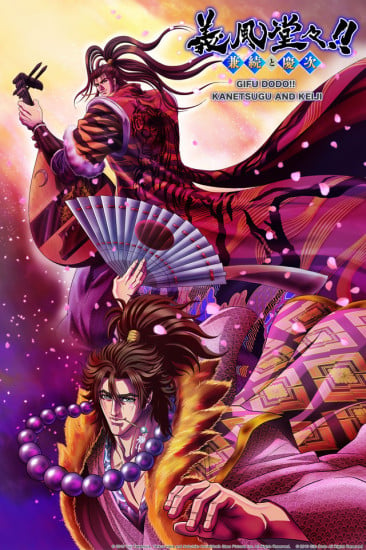 If you're looking for anime similar to Gifuu Doudou!! Kanetsugu to Keiji, you might like these titles.

If you somehow managed to enjoy Gifuu Doudou then you should really take a look at JoJo's Bizarre Adenture (2012).

Gifuu Doudou is full of manly men being men with the odd fighting scene, so if that interested you in the slightest then JoJo should blow your mind. It has seriously manly men fighting in epic battles, dudes shouting all the time, a script full of awesome catchphrases and over the top action at every turn.

And if you hated Gifuu Doudou, then watch JoJo anyway, it's a thousand times better in every way possible.

The greatest thing they have in common? Incredibly manly men. The men are RIPPED. Bristling with muscles that threaten to make their clothing explode if they flex, giant necks bigger than the length of both your hands, larger than puny wussier non-muscular (Everybody is nonmuscular in comparison) and just so crazily buffed that it's pure testosterone.

Otherwise, Keiji deals in samurai while Jojo is more about generation stuff, a bit of manly events in one era and flex plex manly events in another era. But simply put, where Keiji falters in being constantly entertaining, Jojo triumphs for the sheer amount of cheese and ham with the quite frankly better action scenes. Keiji has the muscles and buff necks but Jojo has the entire manly package.

Both anime reek of testosterone and involve manly men doing manly things.  Also, the character designs of both series are similar.  While they have different plots and different settings, I think those who like one may like the other.