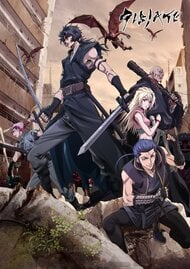 Until It All Burns Out

The story had much more potential that what was potrayed. I felt like the characters totally lacked common sense. Those were monsters with zombie effects for fuck's sake!! not some street dogs! Their poison can transform others into monsters too! If it was me, i'd never NEVER step outside at night...if i absolutely had to, then i'd carry a torch twice my size! No actual elements of fear, sadness, empathy shown here.... Ugh! such a waste of characters with potentials............ such a wasteeeee......

To say I was "enjoying" the series may have been an overstatement,but I was invested enough to want to see it through to the end....I wanted to see if the doc really could make a cure...I wanted to find out the mystery of how the warriors travelled through time...I wanted to see if Kathleen could find happiness with her new friends in a world gone mad,and I even wanted to see if Ayame could patch things with her father. ...and then episode 11 SH*T THE BED. The flaws were apperant from the start. The story,despite it's unique elements,is very basic zombie survival stuff...the animation is well below par...the action is slow and awkward...The script is a rushed mess and the characters aren't well fleshed-out... ...but despite all of that,I still found myself caring enough to keep going. ...But then, Everything that everyone went through... ...All the mysteries... ...got THAT for a conclusion. One of the worst twists I've ever seen in any medium... Any and all enjoyment I got out of this series,was obliterated beyond salvation. Frickin' aliens, man...