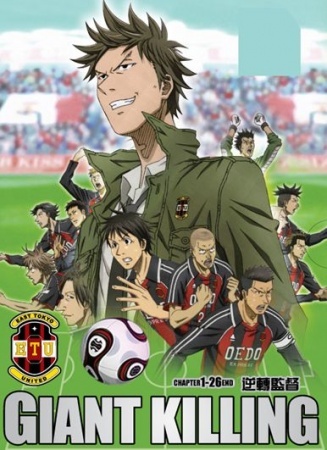 Ashita Aoi, a self-proclaimed soccer genius. While he is affiliated with a junior team in his native Ehime prefecture, a violent incident on field ends his career in middle school. In the depths of his sorrow, he meets a man by the beach.

"WANTED: Players with Beautiful Legs!" With that, Kicker Weekly sports reporter Yukari Ogata is sent on the onerous task to cover Tokyo Crusade, an amateur football club. But what would have been another frivolous assignment becomes a potentially worthy scoop, when Ogata discovers that Chihiro Oki—a football freelancer who goes by the name "Joker"—is playing at the tryouts! Rumors have it that the Joker can fill any position on the field, and whichever team he joins is guaranteed to win! But why has such a talented player gone unnoticed for so long? Throw in an ex-league professional, a bunch of ragtag players and the eccentric coach who will bring them all together, this Division III club may just have what it takes to win the Emperor's Cup!

Rising Sun will revolve around Tsubasa as he aims to participate in the Olympics as a representative from Japan.