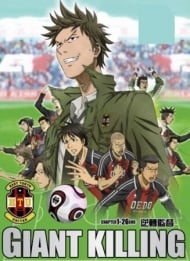 A sports anime that's fairly unique for the medium of anime, but viewers who've seen American sports films will recognize the tropes early on. Still, decent production values and execution of the premise make this series worth a watch (even if it won't be killing any giants in the ratings department).STORY       It says something about the anime industry when not centering on high school or high school students is enough to make your show unique. Giant Killing takes a road less travelled and follows the fictional professional club East Tokyo United, going for a more realistic approach devoid of any over-the-top sports superpowers. The name 'Giant Killing' comes from what manager Tatsumi calls his tactics for defeating large, powerful clubs with a small, weak one. And considering that East Tokyo United has no budget, a second-rate stadium, a tiny fan base, and a decade-long losing streak, they might just be the smallest and weakest club in Japan's top soccer league.       With the premise out of the way, let's get down to the craft of the story. A point in this show's favor is that it is willing to let ETU lose from time to time. Most stories featuring underdog teams have them lose the first few games, then turn things around and blast their way to the championship against the clearly evil powerhouse squad- ETU endures hot streaks and cold slumps in a believeable manner. Another point is that there is no clearly "evil" squad or character that goes around kicking puppies and twisting their mustaches just to make sure the audience knows to root against them (aside from one slimy ex-ETU manager, but even he isn't too badly overblown). Finally, the tactics Tatsumi uses to win the critical soccer matches actually have a degree of foreshadowing to them so they don't seem like Deus Ex Machinas pulled out of thin air because the plot demands ETU win.      Unfortunately, these critical matches are also some of Giant Killing's weaker moments, as there were times a game could have been wrapped up in an episode or two less than what was used- so occasionally the plot can feel a bit padded. Also, given that the manga is still ongoing as of January 2016 and this show was released in 2010, it should be obvious that the anime doesn't cover its source material in its entirity. However, the ending was still solid, demonstrating that East Tokyo United has turned a corner is no longer the punching-bag club they once were. Frankly, I thought the anime ended at a very good point- before the matches got stale, but with the main challenge cleared so there's still a sense of closure. The story doesn't stray too terribly far from the archetype, but is unique and well executed enough to last its 26-episode run. PRODUCTION VALUES          The art is decent but nothing special. Animation quality is acceptable, with the use of CGI being fairly well done, restricted to large crowd shots and full field shots where there is a lot of motion and the lack of detail is less noticeable. The shots with traditional animation weren't particulalry inspired, often just showing close-ups of individual players during the matches, or at most showing a small range of motion, with large scale plays always rendered in CG. The character designs, however, are certainly unique as they aren't stereotypical anime looks, and are varied enough that you never have trouble telling characters apart even with the large cast.       Sound in Giant Killing is definitely the high point of the show. Both the OP ('My Story'- The Cherry Coke$) and ED ('Get Tough!'- by G.P.S) are stellar, going for a British punk sound that immediately conjures up thoughts of both soccer and giving impossible odds the finger (which is to say they fit the theme of the show perfectly). Also, bagpipes. The soundtrack itself is fairly basic, with nothing that you probably haven't heard in a sports movie or show before. As this show hasn't been dubbed in English (and likely never will be due to sports anime/manga typically selling poorly in North America) you'll have to watch it in sub. I could certainly tell the voice actors apart and get sense of their characters, but not being a Japanese speaker there's a limit to how well I can say they did or didn't do there jobs. There's a smattering of English-language dialogue throughout (soccer is an international sport after all) and while I could tell it wasn't the first language of whoever was speaking, it was never ears-bleeding bad either. Lastly, I want to mention the sound effects, which rarely stand out to many in even the best anime. The effects used when the ball was being kicked gave a real sense of power and speed, like a pro soccer player really had struck the ball with all his might, greatly helping the imersion. CHARACTERS            For if you like cocky, eccentric geniuses, manager Tatsumi is your man. Since ETU doesn't have the raw talent to dominate opponents he has to change tactics nearly every match to attack whatever weak points the opponent has, be it over-reliance on certain players, tatical inflexibility, or simply not taking his small club seriously. His oddball personality and unique way of doing things tend to drive most of the people around him nuts, however. The rest of the cast is solid as well, though there are limits to what you can do when you have to cover a lot of characters with little time. All the major cast members have distinct personalities, most of which undergo a degree of development. The substitute players and less important staff tend to be more one-note, but since they're on screen less it's forgivable. Overall, the characters are pretty good for a cast this large and for this genre of story. OVERALL     Giant Killing may not kill any anime giants, but it is an entertaining ride for those looking for a good sports anime.

Giant Killing is the sports anime equivalent of an Avengers movie that’s told from Nick Fury’s point of view. The juicy action scenes are all here and the fanbase in-fighting is as alive as ever, but the real meat of the story is in the actual assembling of the team. In Giant Killing, your Nick Fury is Tatsumi Takeshi, the prodigious football manager who’s already made a name for himself overseas, but gets called back home to take over the basement-dwelling East Tokyo United football club. At first, there’s some excitement in the ways Tatsumi pushes everyone’s buttons, especially since his antics really do yield some very realistic results. He doesn’t win games right away as ETU’s new manager, but he is able to change the mindset of the locker room over time. The change is gradual, but it’s a slow-moving process that requires the efforts of every team member, as well as the stupidity and general uselessness of ETU’s entire coaching staff. And like any good sports anime worth its salt, most of the character development happens during the actual games. With this standard progression of events, it's almost impossible for Giant Killing to trip over itself and screw things up. But at the same time, it’s also easy to see why this isn’t anything particularly special. As careful as it is about itself, Giant Killing still comes up short in several aspects: games that shouldn’t have lasted as long as they did, lengthy character monologues that broke the momentum of some in-game action, and plot threads that were teased but didn’t really go anywhere. The show lacks that little extra oomph and kick to nudge it over the average line, in other words, even if it’s supposed to stand out with its fairly unique focus on a professional football team. But it is solid and isn’t actually half-bad. Its focus on adult protagonists makes for a nice change of pace for a sports anime, and it’s generally friendly to football newcomers. It’s also able to balance everyone’s personalities on the team nicely – because the characters are well-defined, you'll have no problem familiarizing yourself with the different positions of a football team.  But as it is, Giant Killing is still pretty average. You might not have a blast with this, but getting into it won’t be a complete waste of time. It’s got its fair share of victorious, pump your fist-type moments, but you’ve also got to brace yourself for the dull downtime. It's almost like watching an actual football game, really. At least it’s got that level of realism going for it.

This anime has a good plot,but the animation throws me away, not my type, thus it still watchable yet, seems the transition phased is lagged to much, slow phase just to reach a longer episode count, the main protagonist build too much up at the pilot episode but slightly reder useless in my perspective. It is underated because it is not that good of an anime in the first place. but the plot damn it's good other aspect just dragged it down. 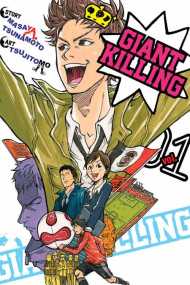