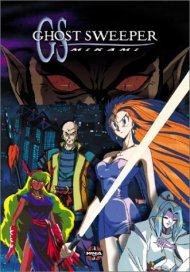 Mikami Reiko, along with her psychic and otherworldly cohorts, run a ghost sweeping business and will vanquish any foe you desire -- for a price. But when the long-dead Nosferatu is awakened (along with his arachnid companion Ranmaru), all of Tokyo is under imminent danger of being turned into bloodless mindless zombies! Can the gang destroy this villianous demon with the help of a samurai ghost and an ancient spear, before the entire world as they know it is destroyed?

StoryGhost Sweeper Mikami is quite a bit like Ghostbusters -- Japanese style. If you've seen Yougen Kaisha you'll recognize their similarities instantly, for good reason! However, where Yougen Kaisha succeeded, GSM seemed to fail in my book. The overall plot is the same: group of bumbling buddies takes cares of spooks and spirits for a price, running into various hijinks along the way. The leader is obsessed with money, while no one else has any. In GSM's case, a very nasty case arises, and thus the movie begins. GSM is a random slapstick comedy, but also has very dark undertones as far as what the actual plot is. It also is number 2 ever of things I've seen with zombies in them (Interlude being the other). It feels like an episode of a longer story, more so than a movie. The humor is funny at times, often they say things like "Oh no, my character isn't supposed to die yet!" and other silly things like that. However, the humor couldn't save the rest of the show, which was VERY poorly strung together. Events seemed mashed together and didn't have a good flow, and the tone of the series changed so often that it was difficult to even accept it as a comedy. Near the end of the sixty minutes, I just wanted the movie to stop. You don't care about the characters or even what's going on, because it managed to lose your interest quite awhile ago. Everything is really cliche as well, right down to who ends up saving the day. I don't know. A good idea for a series (I love the Ghostbusters style), but very poorly executed in this case. I gave it a four still for the humor, but I feel like that's generous. AnimationVisually, Ghost Sweeper Mikami was nothing to be excited about, at all. The animation is older indeed, but still was fairly inexcusable for how bad it looked a lot of the time. The character designs were downright odd, with Mikami having eyes as big as one of the freakish characters in "Judge". The random monsters were cute, but Nosferatu's character was just bizarre. His clothing was some of the worst I've seen, with really strange mixtures of colors like lime green, bright pink (WATERMELON, ANYONE?), purple, and blue. At one point he was wearing elf shoes. What the hell?! Since when do vampire overlords of sorts wear elf shoes? I half expected Santa and his elves to fly out of nowhere and get their blood sucked out. Maybe Nosferatu got crappy presents last year and took it out by eating 27 elves, and wore one of their set of shoes in memorium. Special effects were super cheesy, backgrounds were detailed but still cheesy, and overall, it looked cheesy and old. SoundThe music sounded porn from the 60s. Other than that, it was pretty useless and in the background, and didn't contribute much. Voice acting seemed fine, but Nosferatu sounded like a crotchety old man, which really didn't fit. CharactersThe characters in GSM were definitely amusing, but a bit stereotypical. Reiko reminded me so much of the main character of Yougen Kaisha, right down to her drinking tendencies and love of money. The others had their quirks, but weren't onscreen enough to make that much of an impression. The cute monsters were the best, but not onscreen much either. Nosferatu was a bizarre evil boss (that had chest hair and wore tons of gold crosses?!), with his sidekick seeming more convincing as the bad guy. OverallOverall, Ghost Sweeper Mikami might have proven to be mildly entertaining, but probably not worth watching again. I've seen plenty of things that are similar to this, and all of them that come to mind are better in every way. And at an hour, it won't exactly go by as quick as a 1 part OVA, so I guess it's up to you. I personally wouldn't recommend it, but if you are desperately looking for ANYTHING that you could get two laughs out of, you might try this. 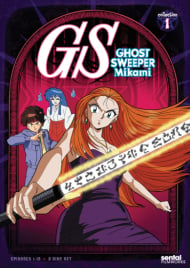 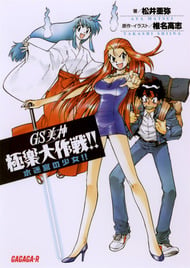