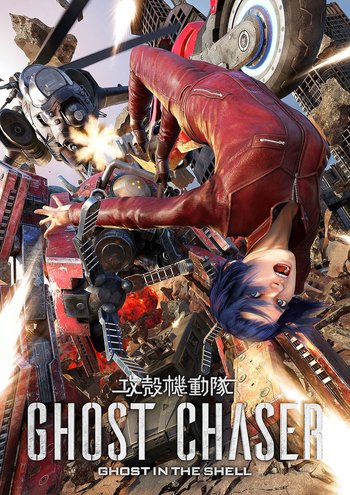 If you're looking for anime similar to Ghost in the Shell: Ghost Chaser, you might like these titles.

In the far future, the world lives under the guidance of Olympus – a utopia built after the end of a global war that decimated over half the world’s population. Mankind lives beside both cyborgs and bioroids, a breed of genetically-engineered humans who don’t feel negative emotions. Deunan and Briareous continue to fight for the Olympus task force E.S.W.A.T., but after Briareous is injured in a mission involving a terrorist attack, Deunan is forced to partner with Tereus: a prototype combat bioroid whose genetic makeup was taken from Briareous. Together, the three must try to unravel an insidious terrorist plot and save Olympus once more.

Left to survive in a post-World War society, two mercenary soldiers - Deunan and her cyborg partner Briareos - are sent on a mission on the outskirts of their war-torn city. During the operation, they run into Iris and Olson, two citizens from the utopian city of Olympus who might have a way to save the world, but the ruthless Talos and the scheming warlord Two Horns have their own plans. It's up to Deunan and Briareos to safeguard their newfound contacts and help save humanity's last hope.